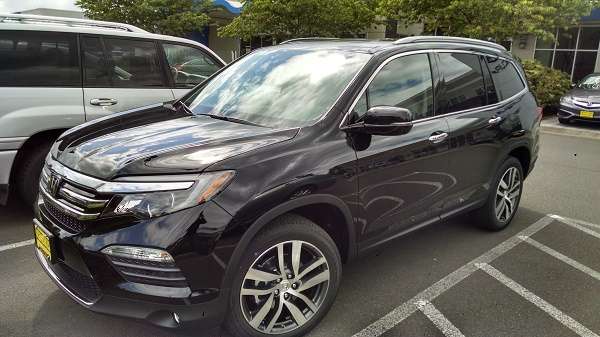 L.A. traffic is rightfully acknowledged as the worse on the west coast of the U.S.. With a hope and a prayer, I navigated 2017 Honda Pilot Elite through Los Angeles on the road to Santa Barbara, California. The transitioning road traffic was relentless.
Advertisement

L.A. is one of those hot spots that comes with a gnarled, tangled “laddered” freeway system. This H patterned interchange, was developed in the late 1970’s and 80’s in the hopes of easing traffic congestion. It does work at times. And for those unfortunate souls attempting the ladder climb from Los Angeles International Airport to points east and north, the 105, 110, 405, and the 605 Freeways become as familiar as a less than perfect family member.

Honda’s proprietary style is recognizable throughout its mostly reinvented lineup. Pilot’s interior is comfortable, eye pleasing and very intuitive as to driver to control positioning, 2- dial gauge dash layout, and one of the better working center stack mounted static touch screen monitors in the auto industry today. For 2017, our Pilot Elite sports comfortable leather seating surfaces, offering heating and power adjustment. The driver’s seat passes my seat test with flying colors, as does the overall look and feel of the cabin, uptick, yet not over the top.

2017 Pilot has morphed into a near premium, family outing-event hauler, with 3-row easy access and expanded cargo hauling capacity. In my opinion, the best in class.

Truck tough in utility, mild off road capability, load hauling and towing capacity, what Honda has done with Pilot’s freeway-travel refinement is a bit mind boggling. This is where Honda’s brilliant 3.5 Liter 1-VTEC gasoline V6 engine, and optional push button activated 9-speed automatic transmission, works in unison with arguably the best riding suspension available in the midsize 3-row SUV segment. Gone is the rut transmitted, jarring tire-bump ride of SUV’s past, replaced with a very controlled float, that seemingly improves as the miles melt away in the rear view mirror.

Although not a tire burner in the hot-shoe sense, I found ample acceleration on tap when called on, for onramp transition, and lane changes. Also, with Honda’s advanced active safety features on hand, driver and passenger safety is insured, as Pilot, ith driver’s assistance avoids the inevitable no turn signal lane change, crazed riding between the lanes Biker, and the occasional “what the heck,” 18 wheeler pushing you over into lane 4.