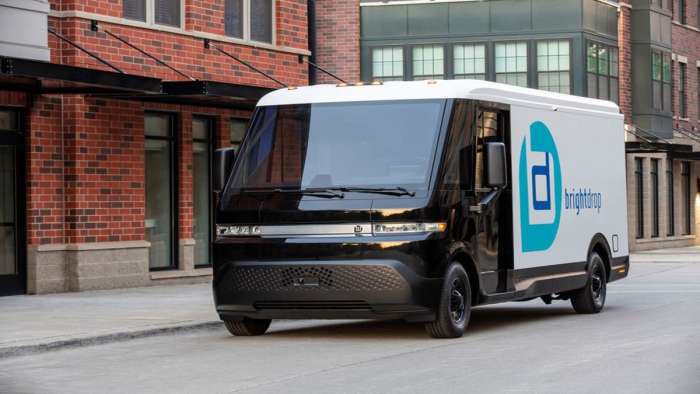 GM's ongoing push towards EVs is not only focused on satisfying the needs of traditional consumers, but also commercial customers looking to add zero-emissions capability to their supply fleets. GM's BrightDrop commercial division is aiming to fill the void with its lineup of cargo vans and the upstart division has not only revealed their second van model but also confirmed that Verizon will be the first buyer of the new model.
Advertisement

The new model is tentatively called the EV410, and the new van is designed to appeal to a wide range of businesses. That includes grocery stores, medium-sized companies, and telecommunication companies. The EV410 is a smaller companion to the full-sized EV600, which was unveiled earlier this year by GM and is designed to be a medium-sized entry in the commercial vehicle segment.

An example of this demand is a newly minted agreement with Verizon, which will buy the first batch of EV410 vans for its fleet of vehicles. The 410s will replace several ICE-powered vans, including Ford Transits and some Chevrolet Express vans that still linger on in some of Verizon's operations.

Why Is The Commercial Segment Ground Zero For EVs?

The main driver behind this push for sales in the commercial segment is rapidly evolving environmental regulations. China and Europe are two key markets BrightDrop can exploit, and both of them are passing laws that require companies to slash the amount of CO2 emissions from their fleets drastically. Companies like Amazon, FedEx, and UPS have already pledged to add electrification to their fleet inventories, and this would give EV companies a potent opportunity to establish a foothold with these customers.

Typically the benchmark brand that they would have to compete with is Tesla, but while the California-based EV company has embarked on making sedans, SUVs, and even semi-trucks, the lone segment that they have not entered yet is commercial vans. Their absence has lifted some of the pressure and has helped fuel a race between companies like BrightDrop, Rivian, Ford, and Stellantis to see who can gain dominant market share in this slice of the EV market.

GM Has Big Plans For The Future

While today's announcement helped shed some light on the future, it still leaves us with some unanswered questions. GM has not released pricing for either van model, and the company also did not reveal how big of an order Verizon placed with BrightDrop.

However, what's known, is that the EV600 and the EV410 are part of a broader product push, with GM CEO Mary Barra revealing that the company will be releasing more EV vehicles in the future, including a medium-duty pickup well as a large full-size van model. In the meantime, the EV600 and EV410 will be powered by GM's Ultium battery system, which should give the duo a respectable 250 miles of range per charge.