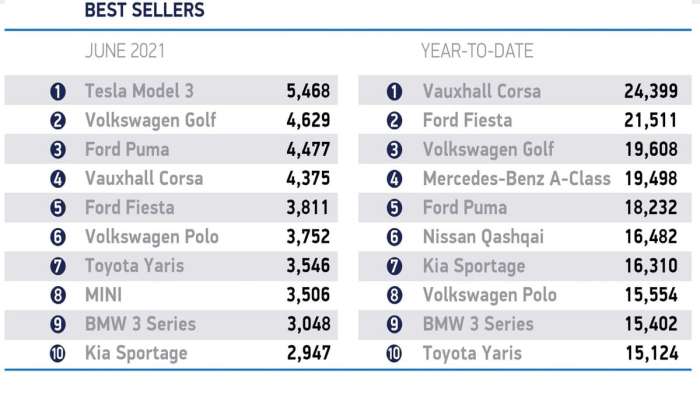 The Society of Motor Manufacturers and Traders for the UK has released its June 2021 sales data and the Tesla Model 3 has come out on top as the best selling vehicle, despite being more expensive than other vehicles. Let's look into this more!
Advertisement

The Tesla Model 3 was the best selling vehicle in the UK for June, 2021, beating out other electric and internal combustion engine vehicles. This is an extraordinary feat considering that the Model 3 is more expensive than other vehicles listed. Tesla continues to solidify itself as a top demand auto manufacturer.

The following is the UK sales data for June, 2021. I've taken the liberty of also putting the approximate cost of each vehicle (using the least expensive version of the Model 3 and the other vehicles as my price for it) from various web source including bloomberg.com, autotrader.com, and uk.motor1.com.

The Tesla Model 3, despite being more expensive than 7 of these other vehicles is the best seller. Very impressive. Also of note is that Volkswagen has 2 of the top 10 spots and I think that bodes well for them.

Where Will Tesla Be in the Future

Considering that Giga Berlin is not even online yet, I think Tesla is doing amazingly well in the UK. In fact, I think Tesla could produce a mini Giga factory in the UK to make vehicle deliveries even easier. The reason I think this is because exporting from Shanghai is a long distance geographically to the UK.

If Giga Berlin can ramp to its 500,000 vehicle production capacity within a year, that will be over 41,000 vehicles a month. There's no doubt that some of these will be shipped to the UK, unless Germany and the surrounding countries have that high of a demand and are able to afford Tesla vehicles.

Either way, I think Tesla should make a mini Giga factory in the UK.

No Other Electric Vehicle Made it In the Top 10

The most impressive fact of the June 2021 UK sales data is the fact that Tesla was the only battery electric vehicle in the list. As Tesla continues to reduce costs and produce its even cheaper versions of its cars, like the Model 2, it is going to dominate each and every category.

I would not be surprised if in the future we see UK sales data that looks something like this:

What do you think about the June, 2021 UK sales data? Will Tesla start to show up more and more in the top 10? Will any other vehicle companies be able to match Tesla in cost reduction, performance, and features?