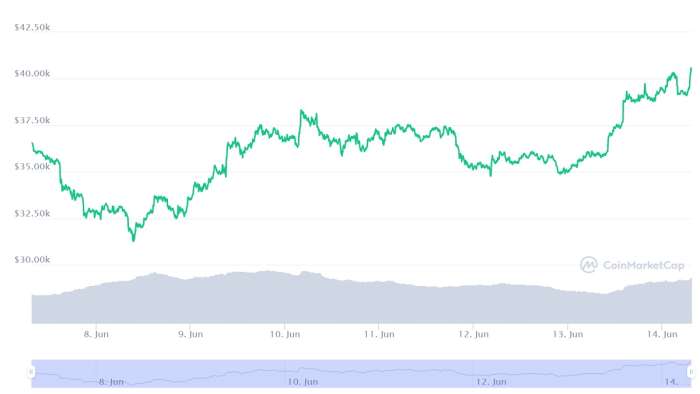 Elon Musk Tweeted recently that Tesla has only sold 10% of its Bitcoin and will begin accepting it again once mining moves to a higher percentage of renewable energy. Tesla is still holding 90% of its Bitcoin!
Advertisement

This is inaccurate. Tesla only sold ~10% of holdings to confirm BTC could be liquidated easily without moving market.

"Diamond hands" is a term of holding an asset without selling it, even when its value goes below what you paid for it.

In the above chart, you can see that Bitcoin has been on a volatile ride the past 7 days, dipping close to $30,000. This is lower than what I believe Tesla paid for its Bitcoin. As someone who invests, it can become a little stressful when assets you have purchased start to drop below what you paid for them. But Tesla appears to have weathered that storm and not sold anymore of its Bitcoin.

What will Teslas Bitcoin be worth in the future?

There are those who think Bitcoin will reach $105,000 and eventually $500,000. If this holds true, Tesla buying its Bitcoin for around $32,000 is going to look like one of the best moves a company has ever made in history. Here's a video of Cathie Wood, whose fund invests heavily in Tesla, talking about her long term price prediction for Bitcoin.

We get: $21,050,000,000 (That's just over 21 billion dollars). That's an incredible return and if this ends up happening, Tesla not selling through the Bitcoin volatility will indeed be diamond hands.

Credit to our Master of Coin

When will Tesla start to accept Bitcoin again?

When will Tesla start accepting Bitcoin for its cars? As of now, it's been about a month since Elon Musk Tweeted that Tesla was suspending Bitcoin purchases and it really comes down to this Tweet:

Tesla buying Bitcoin has certainly caused a lot of people to question Tesla and demand that they sell it. But to this point, Tesla has not sold any Bitcoin. Should they continue to hold? Will Bitcoin reach $500,000 in the future? Will it move toward more renewable energy?