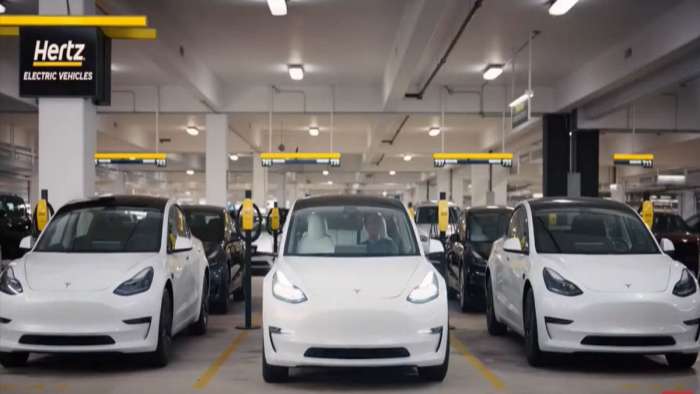 Hertz Buying Vehicles From Tesla Is Much Bigger Than You Think

There was a deal announced today between Tesla and Hertz. Hertz is buying 100,000 Model 3 vehicles from Tesla. This is a genius move from Hertz, which recently went bankrupt. I believe this is the first deal of many between rental car companies and Tesla and is the beginning of the robotaxi network.
Advertisement

Tesla and Hertz are in the news with a reported deal for Hertz to buy 100,000 Model 3 vehicles from Tesla by the end of 2022. This is huge and Tesla has never had such a large number of orders from a single source. From a stock perspective, this will nudge Tesla slightly higher in 2022 by around $1 of E.P.S., according to financial analyst, Gary Black, and Warren Redlich thinks the real strategic move here is robotaxis, and Hertz placing themselves ahead of the competition by being able to awaken this fleet of vehicles when Tesla solves autonomy.

Let's dive into the impact of autonomy and what this means for Tesla, Hertz, and individual Tesla owners.

With this deal, Hertz now becomes the 2nd largest robotaxi operator. There is a question if robotaxi and level 4/5 autonomy will happen. Warren Redlich is confident that Tesla will nail FSD (full self-driving) by the end of 2023. I think this is an accurate timeline and is in line with what I think.

Warren has driven Tesla FSD Beta 10.3. He says it drives very good. It has its flaws, but it continues to improve with each iteration. When Dojo comes online in the next few months, it will rapidly improve FSD.

If FSD is solved by the end of 2023, which I believe it will be, Warren makes a very good point and says that if those 100,000 Model 3 vehicles were sold to individual owners, then those individual owners may not all use FSD and operate their vehicles as a robotaxi. This will be less profit for Tesla than what Hertz is going to do with them.

With Hertz using all 100,000 vehicles as robotaxis and operating them 18 hours a day, that will be much more use than individual people using these vehicles. Tesla is very happy to make a deal with Hertz here because of the amount of use Hertz will give the vehicles as opposed to individual owners.

Warren also comments that Hertz will become a much more valuable company with this deal and operating those 100,000 vehicles as robotaxis. Though not financial advice, he thinks Hertz can 4x in the next few years at a 20 P/E ratio if FSD gets solved and the company makes 3 billion dollars a year in gross profit from its autonomous fleet. This is good for Hertz and Tesla.

Hertz is in a great position. All Tesla has to do is solve autonomy and in an instant, Hertz has 100,000 autonomous taxis that are much more price competitive than Uber and Lyft.

What Else Will Happen Besides Hertz and Tesla

What will Hertz do with these cars? Hertz will likely hold them and run them as a robotaxi fleet, making 5 billion dollars a year in gross profit, 3 billion dollars net profit. Tesla will make the same in a 50/50 deal with Tesla splitting the proceeds. Tesla will make more money with these vehicles as robotaxis than with them sitting in an owners garage doing nothing.

Tesla is selling quite a large number of cars to individual customers. For Tesla to sell 100,000 cars to customers requires quite a lot of logistics. But to sell to Hertz, that is selling to one entity and that will be easier to manage.

Warren thinks that Tesla will work with Hertz as different locations open up for robotaxis. If California opens up first, Hertz can drive a bunch of cars to California and start running them as robortaxis there. The question is, will other rental car companies buy Tesla vehicles to eventually operate them as robotaxis. I think they should - if they want to remain competitive.

The top rental car companies in the U.S. are Enterprise, Hertz, National Car Rental, Alamo-Rent-A-Car, Turo, and UHaul. I think that these other companies will need to make a deal to buy robotaxis from Tesla in order to stay competitive. For UHaul, I think they should put in an order for 100,000 CyberTruck's and hook up trailers to them in order to do FSD. We'll need to see if Tesla can handle that use case with cameras, or if cameras would have to be put on the trailer. I think they would be.

Lastly, Hertz is not getting any special deal with these vehicles. Each and every one will cost the same as if an individual customer bought them.

To be clear, cars sold to Hertz have no discount. Same price as to consumers.

What do you think about this deal with Hertz and Tesla? Will other rental car companies follow Hertz? If they don't, will they remain competitive?

LG's New EV Battery Plant Is a Welcome News for Tesla
Tesla Giga Berlin's New Hurdle: It's Not Only the Gov't, but Now Tesla Itself
END_OF_DOCUMENT_TOKEN_TO_BE_REPLACED