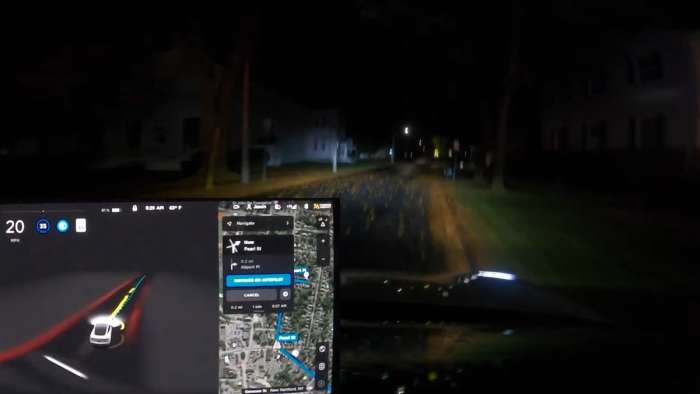 We have the first reports of an alleged accident with Tesla FSD Beta, which is reported on the NHTSA website. Let's look at the details and see what's going on.
Advertisement

There is a report of a crash with Tesla's FSD Beta, which was submitted to NHTSA, the U.S. National Highway Traffic Safety Administration and is now on their website - as a complaint with ID number 11439740. You'll find it at the bottom of the page here and you can expand the complaint to read the details.

If one looks at the report more closely, there could be some questions about the validity of the report. In this case, the accident took place in Brea, California. It involved a Model Y which was in FSD Beta mode. It took place on November 3, 2021.

The report of the accident says that the Model Y was trying to turn left, but the car went into the wrong lane and hit another car. The complaint alleges that the driver of the Model Y tried to turn the steering wheel to avoid the crash, but that the car by itself took control and forced itself into the incorrect lane creating an unsafe maneuver.

The Model Y ended up being severely damaged on the driver side and luckily, there are no injuries or deaths reported in this claim. Even though this report is on the NHTSA website, proceed with caution before believing everything in it.

Anyone can submit a safety claim to NHTSA. But the real reason to be skeptical here is the report says the car took control despite the attempt to turn the wheel. For anyone who has used FSD Beta, you will know that once you try and turn the wheel, the software immediately disengages and goes into manual mode. There's no way with someone taking over the wheel that the car would override that action, unless the attempt was very light pressure on the wheel - and if that is the case, that isn't trying to take over.

We don't know if the Model Y in question is a standard range or long range vehicle. Tesla FSD Beta is at level 2 autonomy. This means the car is not autonomous and the driver needs to be ready to take over at any moment for any reason. It's difficult to believe that FSD Beta just decided to move into another lane and hit another car, but it could have - and the driver, if they were paying attention, should have seen that and corrected it, as many YouTube videos show of drivers disengaging FSD Beta.

The report on NHTSA said the car sounded a warning, but was halfway through the turn. The driver tried to get the car to go to the correct lane, but the car took control and forced itself into the incorrect lane.

The car that was hit did not have time to avoid the crash. There doesn't seem to be a name or any other reference to the location that the crash happened, so it's difficult to verify if this story is true or not.

NHTSA says that it might remove complaints that it is unable to verify. I think anyone that logs a complaint to NHTSA should have some kind of evidence, a phone number, and be willing to talk about what happened.

What do you think of this reported crash with FSD Beta? Is the crash due to FSD Beta? Did FSD Beta not allow the driver to take over?

Image Credit - Someone using FSD Beta a few months ago and hitting a curb in an unrelated incident.

LG's New EV Battery Plant Is a Welcome News for Tesla
Tesla Giga Berlin's New Hurdle: It's Not Only the Gov't, but Now Tesla Itself
END_OF_DOCUMENT_TOKEN_TO_BE_REPLACED