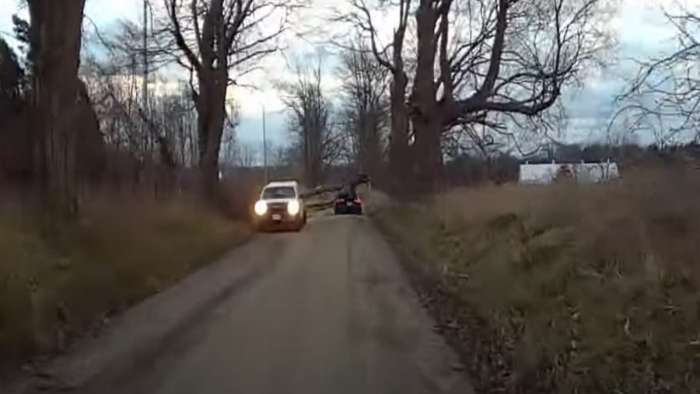 Giant Fallen Tree Smashes Into Tesla With Occupants Inside

We've just received a video of a Tesla (we think a Model 3) that was driving and from the dashcam of the car behind it, a large tree toppled over and smashed directly on top of the Tesla.
Advertisement

Along a dirt road, along the country, there is a Tesla Model 3 seen driving and not soon after, a large tree on the right topples over to the left and finds the perfect (or not so perfect) timing to land its trunk right smack dab onto the top of a Tesla Model 3.

The tree hit right above the drivers seat part of the car while someone was driving his best friend and fiancé to their wedding. The footage from the dash cam behind them was taken by one of the bridesmaids. Higher powers and excellent Tesla engineers were thanked for the survival of the occupants of the Tesla Model 3.

What a harrowing experience! I can't imagine going on a peaceful drive to my wedding, only to have a gigantic tree thump on top of my car out of the blue. I'd be in a panic trying to see what happened and if everyone is all right.

We have some photos of the aftermath of the tree falling on the Tesla and they can also be seen in the linked video here at the bottom of this article. We are truly grateful that nobody was hurt by this unfortunate accident. Some think that this kind of accident has a million to 1 odds. 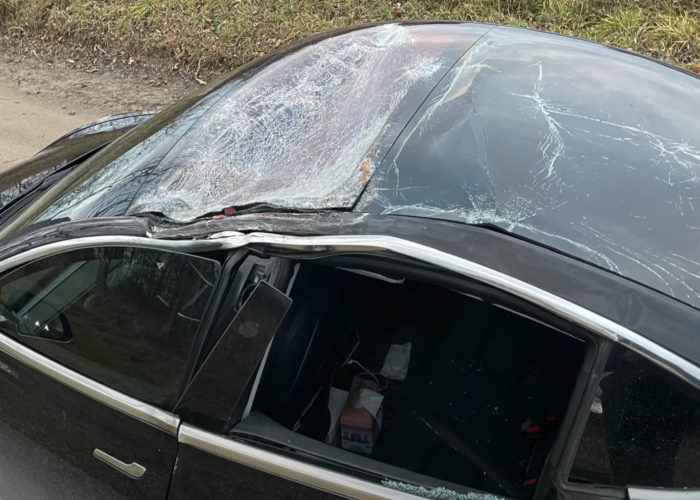 Strength and Safety of Tesla Vehicles

Tesla vehicles are known for being safe and surviving horrific crashes with other vehicles. In fact, there was a crash from a 100 foot drop off a cliff by a Model 3 where the occupants were able to walk away with only mild to moderate injuries. Only a very strong vehicle with a structural body that can withstand great force would have allowed that.

The Model 3 and other variants of Tesla vehicles have received the highest possible crash test ratings from NHTSA and IIHS. However, it has to be noted that neither of these organizations includes an evaluation of a car falling off a cliff 100 feet. But I'd say that the impact from that drop rivals a high speed crash head on.

How much pressure can a Tesla Model 3 withstand on the roof? There was a roof crash test done with a Tesla Model 3 and it was shown that the Tesla roof could withstand the force of 2 African Elephants. That is some mighty impressive engineering!

What do you think about this Tesla accident with a tree? Is Tesla engineers and a higher power to thank for their survival? What are the odds that this could have happened the way it did?