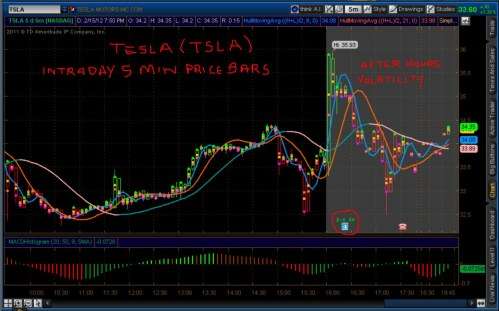 After earnings and forward-looking statements were announced after market close today, Tesla Motors (Nasdaq: TSLA) stock spent its time in after-hours trading with much volatility. Question is, how will TSLA trade when the next trading bell rings?
Advertisement

News of earnings accompanied by forward-looking statements either propel or kill off an uptrend; and Tesla stock has been on a bull wave since October, 2011 with a down blip on news on two key personnel leaving the company.

So, when the news of earnings for Tesla Motors, Inc. (Nasdaq: TSLA) stock hit the public, after-hours trading reacted violently at first, but in favor by taking the stock to greater heights. However, the often fickle after-hours crowd changed their minds, sold off and brought the stock down below its daily close.

Problem is, many traders want to treat Tesla as if it was a mature company like GM or Ford. Fact is , it is not, albeit the engineering achievements make it look like one. So, traders and investors alike must stay focused on important statements contained within the quarterly reports.

In a letter to shareholders, Tesla started by noting they were pleased to report another quarter of solid performance throughout all areas of their company. Most importantly, Model S development and testing remain on schedule so as to commence deliveries by July of this year. As a forward-looking statement, that is a positive.

Last week, the company revealed their new Model X crossover, a unique blend of a minivan, SUV and sports car based upon the Model S platform. That too was considered forward looking, but with a greater sense of physical reality. The response from customers was considered overwhelming, as one day after the reveal, the company had received over 500 reservation requests. Read TN article: Tesla stock sells off early despite news of 2013 Tesla Model X, then recovers

Tesla also announced the start of a development program with Daimler for a new Mercedes-Benz vehicle with a full Tesla powertrain. This represents an increase in the scope and scale of their deepening relationship with Daimler. Again, another positive. Also read: Tesla Model S and Chassis Tech at NAIAS 2012

It was the financial results, though, that drove the stock after-hours. The financial results for Q4 and full year 2011 reflected the continued demand for the Roadster and success in their Powertrain activities. Total revenues in the fourth quarter were $39 million, up 9% from Q4 of last year. Also for the record, the company concluded 2011 with over $204 million in revenues, up 75% from the year before.

Most important to traders was the news that the Net losses will continue as planned until the company reaches volume sales of Model S in 2013.

Automotive sales in Q4 were up 12% from last year due to higher Roadster related revenue, which was partially offset by declining powertrain component sales, due to wrapping up the production programs with Daimler on A-Class and Smart EVs on schedule.

Automotive gross margin at 23% was consistent with last quarter. Full year 2011 total gross margin, though was considered very solid at 30%.

Tesla Motors, Inc. (Nasdaq:TSLA) stock has been in a bull wave since its spike low on Jan. 13. Also per the daily stock chart, the 20-period moving average at 30 is now well above the 150-day moving average, a favorite long-term tool of technical analysts, like Oppenheimer’s Carter Worth who often appears on CNBC’s Fast Money program.

Looking out further, though, the double top of Nov. and Dec of 2011 still stands as upper resistance at the 35.00 level.

One thing seems more probable: The latest news with positive forward-looking statements makes the spike low of Jan. 13 at 22.64 more firm than ever; and the 21.50 low of Aug. 2011 is surely firm as a 52-week low which is now deemed tested and confirmed.

Question is, where does TSLA go from here. Well, morning trading and a few days will decide that. Nevertheless, it’s important to pay attention to forward-looking statements more than present losses, unless those losses are eating up cash.

It’s also important to watch R&D spending, which is reported to start 2012 modestly above the Q4 level. Realize this is due to the inclusion of factory spending in R&D and completion of all pre-production engineering and testing for Model S Beta and Release Candidate vehicles - which the company says adds $15-20 million per quarter in the first half of the year.

Be apprised the company’s own statements say the start of Model S deliveries will cause a shift of production expenses from R&D expense to cost of revenues. Once deliveries begin, gross margin should be heavily influenced by capacity utilization.

Thus the company expects R&D spending to drop in the second half of the year after the launch of Model S, but there will be some pick-up in spending on Model X during that period.

Bottom line here: The market will decide the fate of the stock price as usual; in fact, that’s a given. Just be sure you have the fundamental facts on hand at all times, because TSLA cannot be treated like GM, Ford or Toyota. It is a startup; and that takes chutzpah to handle the volatility induced by those with less conviction who trade in and out of the stock.

Tesla Giga Berlin's New Hurdle: It's Not Only the Gov't, but Now Tesla Itself
Teslas Are Sold Out Until 2023, But The Timing May Reverse
END_OF_DOCUMENT_TOKEN_TO_BE_REPLACED