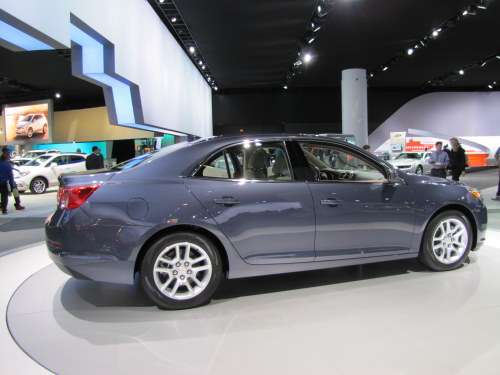 Why the average age of vehicles in America keeps rising

With the NAIAS 2012 in its public viewing stage, Polk’s analysis of national vehicle registration data shows the average age of light vehicles has steadily increased since 1995, though more rapidly in the past five years. Question: Besides government political pressure and marketing self deception, is there a list of criteria by the public that the automakers need to take more seriously?
Advertisement

Automaker want to tap into the potential of demand that is simmering with an aging fleet of cars in garages these days, but, simply put, cars cost too much and are failing with every cost increase to meet the masses where it counts - price. But before we go and list the criteria, a simulated conversation on the floor of the North American International Auto Show in Detroit will set the tone of this rant further.

----------
“Say again, Q?” asked agent 007, as they strolled through the displays looking at prices and technologies of the cars they might use in the future.

Q, the infamous technical genius in Her Majesty’s service, looked at him in his typical stern, stiff upper-lip fashion, then said, “Now, see here, 007, when you pull this lever (pronounced lee-ver) called government pressure, you get expensive technologies like forced electrification of the automobile, which in turn delivers a vehicle that the masses simply cannot afford anymore.

“Yes, Q, but even a Sshcott like me can see that much. Then again, I do get a free Aston Martin to drive, much like the auto executives.”

“Stay focused, 007. Free even to you still costs money to someone,” said Q. “Same goes for other forced government subsidies and mandates. So when a government like America favors a particular technology over another via taxpayer subsidies, you inadvertently bypass free markets, and set a price threshold by which future buyers will simply not pass, especially when those subsidies are stopped.”
---------

Is Q right? Is this a case of shooting ourselves in the foot again? Of course it is. Drop that $7,500 taxpayer subsidy and watch those full EV sales drop like a rock. So, what do people do when they cannot afford a product? They shop elsewhere or hold off on buying all together. So, wonder no more why the average age of cars has gone up in America.

Likewise, how do people react when they do not have jobs, or have a job with the fear of losing it? Or when gasoline prices are high because the President shoots down a pipeline which would alleviate the strain and create jobs? People close up their pocketbooks.

And what about those who can barely afford an EV even with a subsidy? They will simply count the total cost, then choose another option or wait until a better option is availed. Thus, their cars are held longer and longer until they decide.

But the government, auto executives and marketing MBAs still do not get it. They’re being pandered to by the bureaucrats of green-at-all-costs persuasion to choose the politically expedient electrification over the more conservative, logical and economic choices like nat-gas vehicles, mild hybrids, stop-start and other IC engine technologies like HCCI and split-cycle air hybrids which are in development until battery technology matures.

A Simple Set of Criteria

So, aside from a robust economy, allow me to vent my own vision on what America needs when it comes to transportation. In my view, based on 39 years in the auto industry and one who has raised a family and is aware of family wants and needs, America needs an automobile that meets all of the following criteria:

2) A propulsion system that delivers 50 MPG in the city, not just the highway, because that is where most of us drive; plus it more than meets the federal study that says the average daily driving range is 40 miles. Also limits fuel costs to less than $100 per month, even at $3.50 per gallon. Any higher than that and nat-gas should be used without hesitation.

3) A lightweight body structure that is large enough to accommodate a family of five (dad, mom and 2.2 children) comfortably, yet enables any choice of propulsion system to be efficient and cost effective, including electric, hybrid, IC engine (nat-gas, gasoline or clean diesel).

I chose that $230 lease figure simply because it is in the middle between a purchase and lease of present vehicles that fit the needs and budget of a middle-class family, including a retiree. You can adjust the plus/minus if you like. If the total cost of car and fuel reaches beyond $330 per month, though, then natural gas should obviously be used, as we have plenty of supply here in America.

Size and economics should not fight one another. On a size basis, the average need is somewhere between a Chevy Cruze, an HHR, a Malibu or a Ford Fusion. Regardless of brand, there is a size whereby most family transportation needs can be met; and that has to be part of the economic target criteria.

Recall the old days when a factory worker could buy a Ford or a Chevy without air, but with roll-down windows and even rubber floor mats supported by a radio and a heater. At least an owner would have a car that was large enough for an entire family. Families went on vacation in these vehicles; and while any expense is a burden to any family, at least the product delivered its pure purpose - a transportation vehicle.

What do we get today? We get vehicles so loaded up in options that the only way to get a cheaper car is to step down in size to something that no longer fits family needs, not to mention, risk the safety of the family in a crash.

While I like electric cars, at this time they simply violate the first criteria - upfront or monthly cost. However, they do deliver efficiency and lower operating costs. Problem is, it is difficult to justify a $400-450 per month lease for a Volt or a Leaf, especially when a Ford EcoBoost engine in an equivalent sized car will deliver a total operating and total buying cost that is cheaper.

Again, I estimate the size needs are somewhere between a Chevy Cruze, an HHR, a Malibu or a Ford Fusion; the larger the better.

Light weight need not imply less safe, though. Colin Chapman who started Lotus proved this in racing, as he opted to create race cars that were lighter with smaller, less powerful engines, but were equal in safety. Why can’t we do the same? Fact is, we can.

However, ask the steel industry who has a stake in the status quo. Ask the automakers who have already committed millions in manufacturing plants based on the process of welding multiple steel parts. Processing lighter material like aluminum, magnesium and carbon fiber simply change the plant dynamics, not to mention the skill sets of unionized workers who are too often reluctant to change their job description.

Fact is, aluminum and magnesium are indeed lighter; and lighter is what gives every propulsion a greater level of efficiency, whether it is an IC engine or an electric drive motor. If there was ever a place for subsidy, it should be in the research and development of larger, lightweight auto body structures and processes.

The public needs and wants cost efficient, safe, affordable vehicles. They are holding onto their cars longer for real, not imaginary reasons. They want their cars as green as is affordable; but that’s the point that gets missed. In order to make green really count in the world, there has to be volume production associated with it; otherwise the green effort is merely a drop in the ocean. And the only way to sell these new efficient cars in high volume is to reinvent the processes so they can be built at a cost that the masses can afford.

Are you listening, especially Detroit automakers? Do not celebrate too much. After all, NAIAS 2012 is nearly over, so it’s time to get back to work. Fail at this and you will once again pay for your lack of vision. If you do not deliver this time, I fear the Chinese whom you have trained and helped build factories and processes will one day step up to the plate with high quality, lesser priced, light-weight vehicles and export them to America. Learn the meaning of Mene, Mene Tekel. *

[* Ref: Book of Daniel - handwriting on the wall]

Aaron Turpen wrote on January 18, 2012 - 12:03pm Permalink
Good article. This works in several ways and on several fronts as well. Automakers, for their part, generally oppose CAFE standards, but don't do so very stridently because they know that it's all a PR campaign. CAFE (corporate AVERAGE) means that all the company has to do is be PRODUCING a fleet of vehicles with an average fuel economy of whatever the bureaucrat's magic number is that year. This means that GM, for instance, can make 200,000 SUVs getting 20mpg, but so long as they produce a Volt in any numbers (meaning it's a "production vehicle"), to bring up the average to the set CAFE number, they are fine. This is why even with electrics and hybrids being only about 1% of the market, so long as car companies are producing them as "production" vehicles, they can make all the SUVs, pickup trucks, land yachts, etc. they want. All they have to do is make sure that their average vehicle (each model counts as 1, doesn't matter how many are produced) economy is whatever the CAFE standard is that year. Wonder why every car manufacturer is working on hybrids and full electrics? It's how they game this CAFE system. It's also why only one manufacturer is selling a factory-made CNG vehicle in this country, why none of the U.S. automakers are really serious about producing clean diesel (outside of big vehicles), and why most other alternatives are being ignored in favor of electrics. Not only do carmakers get high CAFE bonuses for building EVs, but they get subsidies for the development of them and subsidies (via fleet sales to government) to put them on the road. Note that only EVs and hybrids are "test vehicles" sold to government fleets to "test" them on the road. New gasoline and diesel vehicles rarely (if ever) see this kind of treatment. The whole system is a shell game played for public relations and corporate-government-corporate handouts and deal making.
Frank Sherosky wrote on January 18, 2012 - 8:39pm Permalink
Aaron, you get it. I couldn't have worded it any better. I especially like your words, "shell game for public relations."
Aaron Turpen wrote on January 18, 2012 - 11:07pm Permalink
Thanks, Frank. I'm big fan of electrics, fuel cells, and alt forms of transportation energy (have several websites on the subject and write about them here), but no fan at all of government getting involved in markets. In fact, if government had stayed out of the automotive market, it's very likely we'd all be driving vehicles using some fuel other than gasoline right now as the lack of oil subsidies and handouts to the Big 3 and Big Oil would have meant more (actual) competition amongst automakers.