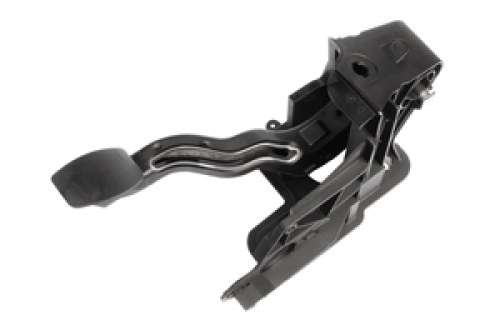 As weight reduction becomes more of an issue with hybrid and electric vehicles, Trelleborg Automotive is using advanced water injection technology to make the one part that touches every driver much lighter - the brake pedal.
Advertisement

At first glance, Trelleborg may appear far too shy to fully explain the technology behind it’s unique, hybrid brake pedal. Truth is, they should be very proud of the visionary accomplishment.

The new Trelleborg brake pedal is manufactured using an established and widespread stamping process that is not only quick but also cost-effective. However, here’s the innovative part: The metal insert is over-molded at the plastic injection stage, using an innovative process called water injection technology (WIT).

The process enables the glass fiber reinforced plastic to fuse with the metal, thus creating a tubular body around the metal spine, so to speak; thus delivering the complete and final assembly in a one-step process.

Fact is, hollow automotive parts with rigid and flexible sections are one of the grails of automotive part design. First developed at the German Institute of Plastics Processing (known as the IKV), the actual water injection technology (WIT) process first appeared in the 1990s.

Truth is, Trelleborg Automotive sees the need for weight reduction of manufactured car components, and has made the connection with the new processing technology.

Trelleborg’s new hybrid brake pedal incorporates a design that blends glass fiber reinforced plastic and metal, a combination that delivers a weight saving of between 30% and 50% compared to traditional, metal brake pedals.

The new pedal also enables cost-savings as a result of a more efficient production process that ensures faster assembly of the final product.

Water and Gas for Other Part Applications

Among suppliers of WIT technology, Cinpres and TiK both advocate use of gas and water injection in some hollow parts for best results. Cinpres came to this conclusion after an extensive series of trials. So, it now recommends that "gas be used initially to form the hollow sections, water to cool the plastic and smooth the internal finish, and finally gas to exhaust the water.”

Water reportedly provides smoother internal walls than gas assist on its own, which is important in parts designed to transport fluids or gases. Water also cools the part much faster, delivering 40 times the thermal conductivity of gas and four times higher heat capacity. The only drawback is, when water cools too fast and pressure remains high, water can create voids in part walls or even break through the skin of the part.

By the success of parts thus far created, that is obviously manageable like any other element of a manufacturing process.

Having designed and processed parts for automotive HVAC ducts where blow molding is often used, I can surely appreciate this WIT process. It eliminates the need to design parts in two halves, thus eliminating a separate assembly process.

In essence, water injection and gas injection appears to me to be similar to blowing molding, but far more complicated. The goal of providing hollow parts is one that feeds the need for light weight and flow-functionality.

Trelleborg’s Series B share has been listed on the NASDAQ OMX Nordic Exchange Stockholm since 1964.
-----------------------
About the Author: After 39 years in the auto industry as a design engineer, Frank Sherosky now day trades, writes articles, books and ebooks via authorfrank.com, but may be contacted here by email: [email protected]