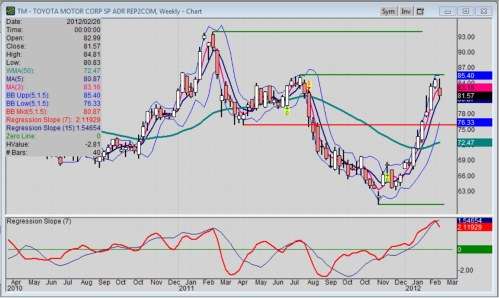 Toyota stock sell-off might be related to CNN report

Toyota stock put in a major low in late November of 2011, but since has experienced a full-blown, bull-market swing. Question is: Did this latest sell-off on Friday merely reflect a pause that refreshes in the bull run or is it the result of the CNN report about translated documents?
Advertisement

Just a few days ago, CNN reported on the network’s Anderson Cooper 360 show that translated internal documents from Toyota Motor Company (ADR: TM) implies the unintended acceleration was a known entity; and there were three attempts or versions of the translation in an attempt to get to the truth.

No matter how you try to spin it, this is not good news for Toyota, especially with so much litigation pending.

After my own report on that subject (read: CNN claims translated Toyota documents imply accelerator glitch was a known factor ), I was looking to measure the outrage or even sympathy for either side by the public. A few comments here and there popped up but not much. I still couldn’t help but wonder if the investors saw it the same way, though.

Then came Friday’s trading, and the stock sold off right out of the opening bell. From Thursday’s close of 84.54 to the Friday open of 82.99, TM retraced up to the Thursday close, then retreated to close Friday at 81.57. Most significant is that there was no other earth-shattering fundamental news to halt the bull run.

Regardless, with the latest bull swing of the stock, it is still difficult to tell if this latest sell-off is a natural correction of a long run, or if the CNN report did, in fact, have an influence.

Just be apprised that even the Huffington Post picked up on the fact that CNN reported that NHTSA and NASA did not have a copy of the document detailing the unintended acceleration issue in the 205L, the vehicle under development at the time. However, Toyota retorted the document had nothing to do with the investigation.

The purpose of this article, though, is not to delve into the CNN report. As any good trader or investor would tell you, it’s more important to understand and trade the reaction to news, not the news itself; albeit, this could turn into more of a problem especially with multiple litigation suits still on the table for Toyota.

Looking at the weekly chart, 81.57 stands as the close of the week. The major high of 93.90 from a year ago is still in place as major overhead resistance where future sellers may once again come into play, but the more-recent high just below of 85.49 is the next resistance level to watch; and TM was just looking to plow through that level when both the CNN report and the sell-off occurred.

On the support side, the major low of 60.37 is firmly old news. The next higher up support would be the broken support of 75.85 and the level to watch.

Yes, as I wrote in a separate article, once again doubt about the integrity of Toyota is resurfacing; and this time the new document which supposedly implies unintended acceleration may have been a known problem could once again be factor in Toyota‘s stock evaluation; and if this CNN story does not affect it, then the doubts brought on by the future litigation stories certainly will.

Don Bain wrote on March 5, 2012 - 12:09am Permalink
So who owns CNN? What is that company vested in? What do they have to gain by spreading such misinformation? On the other hand, the sell off creates opportunity for those who see through the veil. Perhaps they see that Toyota's reputation is teflon-coated and want to get in on the profits? But then so could you and I!!!

Panasonic Updates Profit Forecast, Noting How Much Tesla Batteries Help The Jump
2022 Porsche 911 GT3 Laps Nurburgring in 7:04 With Journalist Behind The Wheel
END_OF_DOCUMENT_TOKEN_TO_BE_REPLACED