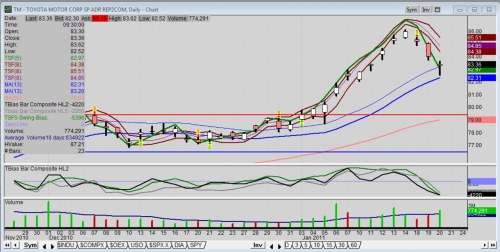 Note the bottoming tail on that last bar, though; as it may be significant.

On the fundamental side, Toyota’s recall issues have taken its toll on its position in the U.S. auto market, falling from second to third place, behind General Motors and Ford Motor Co., but the stock price hasn’t reflected any extreme downgrade by investors since the lows of summer; that is, until now.

Is it a buying opportunity? Perhaps. Should one display more patience? Perhaps a wise choice, too.

Fact is, Toyota (NYSE: TM) has been trading technically above its 50-day moving average since early November, but in a sideways channel until a breakout movement in late October drove it to its present heights and a recent high of 86.10.

The sell-off, though, started Tuesday from the Friday close of 85.96. However, the lower highs, lower closes and lower lows met some buying today. In fact, TM closed 3 cents up from the open at 83.36.

Most market technicians, those who use technical analysis to divine the dynamics of price to assess the market, will tell you that a bearish bar (close lower than the open) is not to be questioned except under special conditions. One special condition is the bottoming tail, which has a bullish tinge to it; and that’s what we see with Thursday’s candle.

Note again the long tail below the close. That shows that buyers came into the market at some point in the day. When checking the 10-minute chart, the low for the day occurred around 10:50 a.m. That means the buying was done through most of the day, not a last minute advance just before the closing bell.

Then again, traders could be just plain unsure; and the balance between bull and bears is just more prolonged in time. Regardless, tomorrow may be decision day on who will decide the next direction, the bulls or the bears.

With Friday being the last day for January options, though, does today’s bottoming tail imply buyers are setting up to come back in early, and not wait until Monday to get long Toyota?

Nobody can say for sure, but it makes sense to look at the price dynamics and think in terms of probabilities. However, many traders have often witnessed this pattern only to see it crash down the next day. So, patience seems the watch word.

Experienced traders might say the Safest bet for new investors might be to watch Friday’s intra-day action. Look for signs of double bottoms or double tops; and note the volume.

Be apprised Toyota received positive press at 2011 NAIAS in Detroit these past two weeks, but option expiration can have a powerful effect on an entire market index, not just a single stock. While buyer beware is always in vogue, option expiration week can be an ideal time, if you’re looking to buy a stock at wholesale rather than retail.

And like Reagan, refer often to that old Russian proverb: Trust but verify!

Disclosure: Frank Sherosky, creator of the chart and author of "Awaken Your Speculator Mind" does not hold any stock or option positions in Toyota at this time.