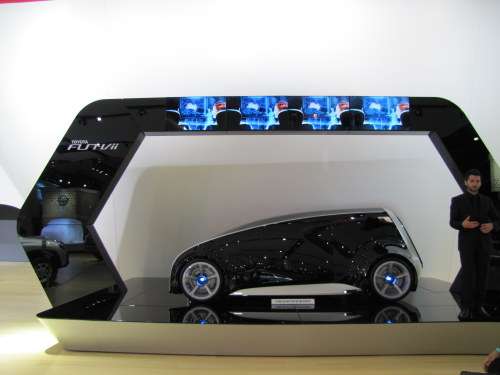 All automakers have advanced concept vehicles for us to eye, but the Toyota displays at NAIAS 2012 especially expressed a level of synchronization between propulsion and styling.
Advertisement

Think synchronization of design and propulsion technology when you view the concepts cars at Toyota’s display at NAIAS 2012, because that is precisely the message that is being sent.

Also think of the year 2025. It should ring a bell simply because it is the year that all automakers are focusing on; the year when all automakers will have to meet the government mandate of average fuel economy of 54.5 MPG. Yet, where it was once obvious what an EV, hybrid or fuel cell should look like, today’s concepts need a sign to make the differences obvious; and that’s a much different message than just a few years ago when it was designed to look intnetinally different.

To those who figure the electrification of the automobile will kill all IC engine use are in for a surprise, though. Consider the following facts.

1) Only 20% of all light vehicles will be hybrid; meaning an IC engine along with an electric motor, or a full EV. The rest will be fuel sipping IC engines.

2) The present taxpayer subsidies will likely be exhausted to support any increase in costs.

Toyota, of course, has shown with their concepts the spectrum of propulsion technology seems fully covered. On the floor there is the Prius, a plug-in hybrid, which still looks like a specialty car. Then there is the Camry hybrid, which looks more traditional in style.

Now fast forward to the concept, NS4 Hybrid. It shows a return to a more a beautiful style, a full-sized sedan larger than the Camry on the floor; one that any family would be proud to own and drive. It could have a fuel cell as well, but the sign tells you differently. It also implies a larger body structure which will command a lot of aluminum.

The other concept car is the FCV-R, which is a fuel cell electric car. A lighter body structure will be required there, too. However, this implies a future whereby a fuel called hydrogen will require an infrastructure for delivery. Will that be in place by 2025? Advantage is, the delivery of the fuel will be similar to present gasoline.

Still, the styling for the NS4 hybrid could have been exchanged for the FCV-R and you would not have known the difference, because the propulsion choice is no longer a big deal. I could not tell the difference just by looking at the styling, so the sign certainly helped.

The message here is that Toyota is making extra effort to assure you that they are working with the latest propulsion technology with every concept, because it is becoming transparent. This tells me, design and technology have grown to be more in synch. No longer is electrification, hybrid or fuel cells a disturbance to design as it has been in past concepts.

Then there is the way out FUN-Vii. You cannot get more modern than this vehicle. However, this car which is merely a show of what the future can be if we let our minds free, could be fitted with any propulsion system.

Get the point? Propulsions are no longer the hang-up on styling anymore. They are becoming just another powertrain option. Now we can get back to designing beautiful cars without having to anchor it to some technology choice. Design and technology are finally back in synch at NAIAS 2012

Recall a few years ago you could tell how a show car was propelled simply by the styling. Now it doesn’t make any difference. Nobody really cares whether it’s full electrification, hybrid, fuel cell, or IC engine as a propulsion; and all will be availed by 2025.

Nonetheless, Toyota has specifically chosen to show these particular future vehicles with two distinct propulsion systems. One is a hybrid which will require a fuel like gasoline; the other is a fuel cell which will require hydrogen. Is Toyota sending a message here?

Regardless, bottom line is, design and engineering are once again on a path to becoming fully synchronized; and it’s a beautiful thing.

Here is my video of the three vehicles. Look beyond the style and just notice how we are at a point where you won’t be able to tell whether a car is a hybrid, an electric or a fuel cell. The propulsion system will be literally hidden, as it should be. And once again our minds will be free to enjoy the styling without all that baggage of how the car will be propelled.