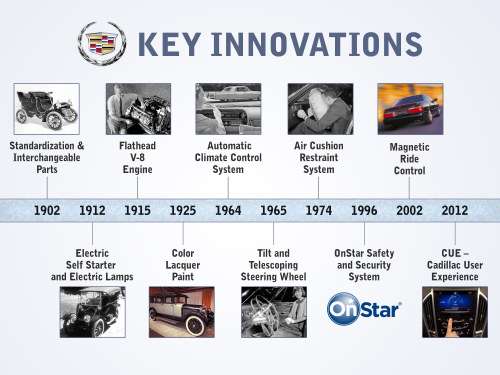 Thanks Cadillac for the electric self starter, now 100 years old

Starting a car today is so taken for granted. But a century ago, the electric starter that debuted in the 1912 Cadillac Touring Edition helped establish Cadillac’s reputation as a test bed of technology and innovation.
Advertisement

Let’s give the Cadillac brand its long, overdue due recognition. Before the electric starter, it took a hand crank, a lot of muscle, and a bit of hope to start driving.

“Hand cranking was the No. 1 injury risk in those early days of the automobile,” said Greg Wallace, director of the General Motors Heritage Center in Sterling Heights, Michigan, referring to the kickback on a crank handle that could break an arm, or worse.

As cars grew larger and purposeful, so did the engines and effort required to start them. It was so difficult, in fact, that it gave rise to the term “cranky,” which often described someone’s mood after struggling to start a car. Thus, the automobile needed a significant innovation.

Cadillac founder Henry M. Leland, who had already pioneered electric lights and electric ignition on his cars, worked closely with Charles F. Kettering, the inventor of the electric starter, to incorporate the device into his cars. The electric starter also was GM’s first electric motor – a core business today anticipating the growth in the electrification of the automobile.

“It was one of the most significant innovations in the history of the automobile,” Wallace said. “It was a complete game changer. Within a few years, Cadillac featured women in their advertising showing them as drivers, instead of passengers or bystanders.”

Before the electric starter, Leland was an expert machinist and precision manufacturer. A few years earlier, he devised component standardization and interchangeable parts. Soon after the electric starter, Cadillac would be the first to introduce the V-8 engine and the synchromesh transmission for easier gear shifting.

“As a premium brand even in its earliest days, Cadillac positioned itself as a technology and innovation leader as a way to set it apart from the dozens of other auto companies,” Wallace said.

Recall the rich may have paid for these vehicles and the new innovations, but they received no special treatment from the tax payers, as we have today with subsidies for electric vehicles.

Cadillac introduced the first automatic climate control and heated seats. Twilight Sentinel automatically turned on and off headlamps, and the first tilt-telescoping steering wheel helped drivers feel more comfortable behind the wheel. All were Cadillac firsts.

In more recent years, Cadillac was the platform for many high-tech innovations. It pioneered the air-cushion restraint system 1974 – a precursor to modern air bag systems. In 1996, Cadillac vehicles were the first to include OnStar, the leading on-board security, communication and diagnostic system.

In 1999, Cadillac introduced the first automotive night vision system. Magnetic Ride Control, the world’s fastest-reacting suspension technology, was introduced by Cadillac in 2002. Today Magnetic Ride Control is a crucial element in the performance of Cadillac’s CTS-V and Escalade models, as well as the upcoming XTS and ATS sedans. It’s also been adopted by a few other automakers on a handful of elite sports cars.

Cadillac is expanding significantly in 2012. For example, the new advanced technology elements CUE is a new user experience for in-car connectivity that will be a signature feature of the 2013 XTS and ATS. CUE recently received a Popular Mechanic’s Editors’ Choice Award at the 2012 International Consumer Electronics Show.

So it appears Cadillac which has been a leading luxury auto brand since 1902 has engineered a historic renaissance led by artful engineering and advanced technology.