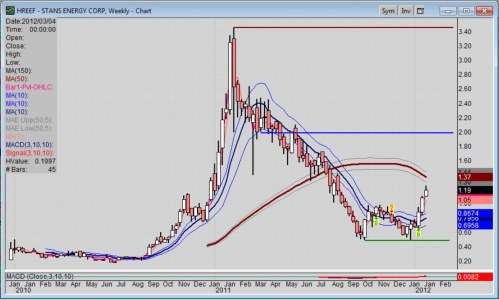 News of the Heavy Rare Earth Elements (HREEs) space has been dominated with China and companies like Molycorp. However, Stans Energy (OTN: HREEF) appears to be making a move after confirming a double bottom at the end of 2011.
Advertisement

Stans Energy (OTN: HREEF) is related to more than just the electrified propulsion of the automobile. Of course, the how and why Heavy Rare Earth Elements (HREEs) affect automobiles may still be a concern for many auto-stock sector readers. So, here’s a note to consider.

Electronics and now the electrification of the automobile has brought these materials to the forefront of the economic as well as the political scene, whether light or heavy rare earth materials are involved.

Recall it wasn’t that long ago when China announced it would limit production and export of key rare earth elements. Read: More intrigue behind scenes of Chinese quotas of rare earths

That caused a stir all over the technology globe, sufficient to have companies like Molycorp and a host of penny stock companies get a new level of attention by investors and traders, as light rare earth prices shot up in 2011 but have since dropped back some.

Such is the case with Stans Energy (OTN: HREEF) especially in the past few weeks, which is tied more to the heavy rare earth elements. To learn the difference, do a search using Google.

As part of full disclosure here, I own a few hundred shares of this stock. I have also traded Molycorp at various times but have no positions at this time, and own other small penny stocks in this energy-related and commodity segment, which is merely part of my long-term speculative investment strategy within my IRA.

According to an article in October, 2011 by seekingalpha.com, Stans has had a relationship with VNIIHT, which is a Russian state rare earths company. This is the company which was behind Russia’s rare earth industry and was behind the technology at Stans’s processing plant as well as the plant in Estonia which Molycorp purchased. So, this is good company, yes?

Also of interest is the fact that VNIIHT is the one entity outside of China which has consistently researched REEs over the years and never stopped, not even when prices plummeted as cheap Chinese production flooded the market. All this from seeking alpha which does outstanding stock reports, in my opinion.

It even led me to RareMetalBlog website which stated its opinion in 2011, that Russia seems ready to emerge as a new rare earth power. Not only has it identified several projects, but also there is an amazing stockpile of concentrate whose origins date back more than 50 years.

But that was then, and this is now, as they say (whoever they are). Bottom line here is that Stans Energy popped to the upside the week of 1/9, breaking the 20 week moving average. That is bullish in the technical and price dynamic sense.

Well, the move has already begun, but a fast move always has a pullback to some degree, as a result of those who bought low are apt to take some profits. The fundamental demand though, for HREEs is the reason for the season on this stock; and the need for patience. The fact the company is working with a known entity in Russia with known supplies makes it far less a gamble.

I can see major resistance at the 1.40 level, because that is where prices acted as major support on the way down. Although it broke there, the reverse situation is now in play at those levels. What was deemed support is now deemed potential resistance.

No stock will go straight up, but when the fundamentals support the technicals, it’s hard to dismiss the potential here.

I considered taking fast profits myself this morning, but I opted to wait a bit. At this price, HREEF is like owning a cheap call option. Risk, yes, but defined and limited with a high potential.