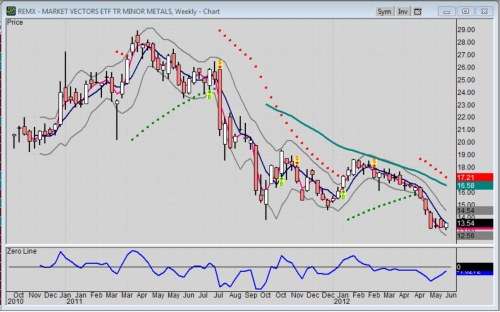 A recent article noted by the Critical Metals Report of an article by Carl Delfeld of ETF Daily News (dot com) seems to have laid it all out as far the rare earth industry goes. He states, "I believe it's time to take advantage of this sharp pullback and make a value-driven move on rare earth stocks."

At first, my question was: What changed? Then I reread his statement.

Ah, there’s the rub: ascertaining value. For the past year I, too, have received dozens of email offers explaining the value of rare earth stocks, and I should buy now rather than later. Well, good thing I never bought much, because the entire sector tanked.

Frankly, I may nibble at times on stocks with potential, but I more often prefer the stock charts to tell me when to buy. However, in the words of the legendary trader, W.D. Gann, time is more important than price. In this case, though, so is patience.

Truth is, on a fundamental basis I can agree with Mr. Delfeld on the sector; his reasoning makes sense. Then again, it is the same reasoning that all of us read in early 2011. Of course we must be concerned with China's economy, up or down; and the world is using more and more rare earth materials which defines the demand part of the equation. Then again there is the supply part of the equation, whereby China has a lot of leverage over rare earth production and prices; and the future may hold a VAT; yes a value added tax to control production inside China. That information, though, came from Mineweb.

According to Delfeld, China still produces 90% and controls 95% of the export market for the 17 metals considered rare earths.

Recall that China shook the market in late 2010 when it suspended exports to Japan to leverage its negotiating position during a territorial dispute. The tactic not only alarmed the world, but took a shot over America’s bow, which is still ramping up EV acceptance let alone builds. The result was a surge in rare earth metals and stocks throughout the summer of 2011.

Truth is, I still find the auto industry searching for alternatives. For example, the Copper Development Association has been making the rounds at all the engineering and tech shows stating how copper and induction motors are cheaper, and performance meets expectations. Even Tesla and Toyota are working together on alternates to permanent magnet motors.

Like all other major news events, though, the quake died down, and rare earths largely disappeared from headlines. As a result, stock prices tumbled. However, demand did not dissipate. In fact, the industrial uses of these elements increased. However, some now say the high prices during 2011 were exacerbated by a ramp-up of mining activity.

Question: Is this enough news to warrant a bull call on rare earth stocks? That’s why I titled today’s article with a question.

Weighing all this, Mr. Delfeld believes it's time to take advantage of this sharp pullback. Furthermore his top pick is Denver-based Molycorp (NYSE: MCP), whose stock is down 66% in the last year.

For those who prefer a more diversified approach, he recommends Market Vectors Rare Earth/Strategic Metals, trading symbol, REMX. It's a basket of 30 companies from around the world that are engaged in mining, refining and manufacturing of rare earth strategic metals. This ETF offers a 5.4% dividend yield.

Since size does matter and location-location-location still counts in today‘s economy, roughly 60% of this ETF’s holdings are in small and mid-cap stocks from all over the world; however, they are mainly concentrated in the United States and Australia.

Much to my surprise, only 10% are based in China, which begs the question: Why so much concern over China? Launched in late October 2010, the ETF rode the wave of the rare metal surge through the summer of 2011, but ended down 39% for the year.

For the record, I own shares in a few rare-earth oriented stocks as part of my long-term investments in my IRA. By all reckoning at the time, I bought them supposedly cheap, but obviously not cheap enough. Every one is down but nowhere near that 39% level; so I won’t complain. Besides, I’m supposed to exude patience as an investor, which I admit I have trouble doing at times.

Looking at the REMX weekly chart because it represents a basket of rare earth stocks, I dare say the ETF has not been around very long; IPO in late October, 2010. In this case, a weekly chart is sufficient, because we need to see the longer-term trend bias. So far, there is no hint of a turnaround, except a successful challenge of the low from October, 2011.

There are two ways to look at this: 1) With all the indicators pointing down, a bottom may indeed be just around the corner; 2) the trend bias may remain intact, too, until the market decides to change direction; and that will require a set of higher highs and higher lows.

Now, Delfeld may be right in his outlook, but it has just not bubbled up yet. Then again, without any other support level on the chart except zero, your guess is as good as mine as to where it will really turn.

In one sense, if you are long-term bullish on the sector, then you could scale in over time, by buying small lots or sell put options on market dips, especially on Molycorp. Just be prepared for further drawdown from this level; and you know what that means - more patience.

Tesla Giga Berlin's New Hurdle: It's Not Only the Gov't, but Now Tesla Itself
Teslas Are Sold Out Until 2023, But The Timing May Reverse
END_OF_DOCUMENT_TOKEN_TO_BE_REPLACED