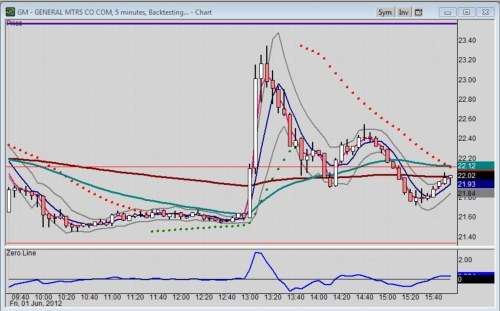 If this new news is so good, then why did General Motors Company (NYSE: GM) stock pop upward then fall back? Does this portend a change in trend in America that will result in confiscation of IRA and 401-k wealth, too?
Advertisement

Any news that reduces burden and costs to General Motors Company (NYSE: GM) should be viewed as great news to GM stock holders. Problem is, looking at the 5-minute intraday chart, the market didn’t quite see it that way, as GM stock popped up on the news, but fell back later in the day. Question is: why? And what does this move portray for the country?

For the record, I am one of those retirees who may receive the lump-sum offer as the letter arrived in today’s mail; wonderful timing I might add. According to the GM news release (which I read later), the retirement plan actions will result in an expected $26 billion reduction of GM’s U.S. salaried pension obligation.

Furthermore, not every retiree will get the offer. I would have paid to be a fly on the wall for those meetings which determined the criteria.

Also according to the news release and the letter, select U.S. salaried retirees will receive a lump-sum payment offer and other retirees will receive a continued monthly pension payment securely administered and paid by The Prudential Insurance Company of America, a Prudential Financial, Inc. company. Again, what criteria determines who gets on the select list? No surprise, GM never reveals those kind of details.

Of course, Prudential has to be ecstatic with such an influx of new funds coming its way, in light of present economic conditions. "We are delighted to be working with General Motors to help the company fulfill its promise of guaranteed lifetime income for retirees in the salaried retirement program," said Christine Marcks, president of Prudential Retirement, a business unit of Prudential Financial, Inc. "We have a strong track record in this area, having worked with companies and organizations since 1928 to provide guaranteed pension benefits for millions of retirees."

Perhaps we need to check Prudential stock instead; but I wonder whose pockets got greased on that decision. C’mon, you were thinking it, too.

Recall that Ford made a similar offer to its employees a few weeks ago. So, in truth, I figured it was just a matter of time before GM employees would receive the same; in other words, I‘m not totally shocked. How many times, though, does that company have to screw with its employees’ and former employees’ lives? Can’t anyone just retire in peace anymore? Notice automakers seldom touch executive pay and compensation, though.

Then again, the stock holders are not getting out of this unscathed, as they will pay a price with hits on earnings. For example, GM’s anticipated cash contribution to its U.S. salaried pension plans to affect these actions will be in the range of $3.5 to $4.5 billion to help fund the purchase of the group annuity contract, and to improve the funded status of the pension plan for active salaried employees. The final amount will be determined at the closing of the transactions.

For stock holders, that means GM expects to take net special charges in the range of $2.5 to $3.5 billion in the second half of 2012; and the ongoing annual impact to earnings will be approximately $200 million unfavorable due to a decrease in pension income. Yes, GM received income from its pension fund! Maybe they can make it up on Chevy Volt sales.

Supposedly, these pension changes do not affect GM salaried retirees’ eligibility for post-retirement health care, life insurance and a vehicle discount. Yeah, we’ll see how long that lasts. Hard not to think, the lower echelon will always pay far more in pain and drawdown than the upper echelon. “Nothing new under the sun,” said Solomon.

Then came the typical human resources response. Note the carefully coiffed mix of words so as to imbue care: “We appreciate the contributions our retirees have made to the company and we have taken great care in ensuring the security of their retirement benefits,” said Cindy Brinkley, GM vice president of global human resources. “Many of our retirees will now have more flexibility to manage their retirement funds, and we are confident that Prudential will provide outstanding service to those receiving a monthly payment.”

Yeah, where was that so-called flexibility in the 401-k plans which might have saved a ton of cash when things started to fall apart? No ETFs to hedge positions, for example. All requests to GM at that time fell on deaf ears. I also see how that flexibility worked out after I left; retirees stripped of dental and eye care without so much as a group plan so as to garner a better price on the outside. Then like the others, I had my deductibles raised to $5K minimum per year; and on a fixed income, of course.

Approximately 118,000 U.S. salaried retirees are impacted by these changes in different ways, depending on retirement date and eligibility. Salaried retirees eligible for the lump-sum payment will have until July 20, 2012 to make a decision on their payment options.

Gee, nothing like giving people time to think, research and plan properly. This is the same kind of quick, make-a-decision scenario retirees had when offered retirement in the first place. I’m sure glad God is still on His throne, because this place including GM is getting colder and harder at every turn of life.

Still, at least I am fortunate to have a retirement. Many people got shafted in the housing collapse, not to mention the economic downturn. I guess the shovels will get a lot of use in the next few years from the aftermath of all those shovel-ready jobs that were not so ready after all, to the shovel-ready healthcare benefits our government dreamed up.

What makes me cautious, even suspicious is that money movement by major companies especially in pension funds portrays a shift in sentiment, not just by the corporate giants but by the public in general. And if you think the government isn't watching this shift salivating, then think again. They will not let go of social security for a reason; the increasing number of retirees under a bad economy is straining the social system. Point is, money movements like this tell me that if retirement accounts can move from one set of hands into another set of hands, then it easily can move into a set of hands like the government which will place it into the general fund. So, think first wave here.

What’s next, IRA and 401-k confiscations? Don’t laugh. Some people are actually thinking along those lines. Imagine annuitizing everything under one big fund or multiple super funds run by your government. If we can imagine it, then, Yes, they can!

Suthy wrote on June 2, 2012 - 12:39am Permalink
Boo hoo, my fat retirement bennies from the auto union are going to get cut because they were not sustainable in the first place. Boo hoo, they are going to send me a big f-ing check to pay me instead. Boo hoo.
Frank Sherosky wrote on June 5, 2012 - 9:40pm Permalink
Dear Boo Hoo Suthy: Better info coming from a person on the inside like me than an outsider who only knows what the news releases are touting. Besides, I was salaried, not union; they still have their full medical. Sure, the check is fine; the complaint I'm hearing is that more time is needed to work with annuity companies than what's being given. Imagine a possible stop or gap in your fixed income cash flow. Regarding your logic, SSI is not sustainable either; so I want to hear your reaction when you are told your retirement age is raised to 82. Likewise, when the government attempts the takeover of your IRA and 401-k to pay benefits for those who do not work because they entered the country illegally. If you think this is not under consideration by Congress and the Senate, then you best wake up. Boo Hoo Hoo!!!
emie0429 wrote on June 27, 2012 - 12:49am Permalink
June 1 brought an announcement from General Motors on their plan to lessen pension liability by a predicted 26 billion dollars. The plan will offer a number of U.S. salaried retirees a lump-sum payment and other retirees a continued monthly payment. The decision-making process is complex; it is recommended to seek the counsel of an experienced financial advisor. The decision deadline is set for July 20, 2012. Go to gm-pension-buyout.com to read a free white paper and more information on the General Motors (NYSE:GM) Pension Buyout.