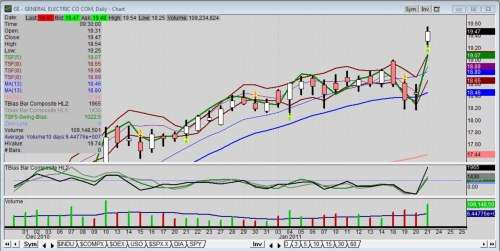 General Electric (NYSE: GE), a major contributor to technology and financing that affects the auto industry, broke out to the upside on a surprise Q4 earnings report.
Advertisement

Note the price gap from yesterday's close is still intact as of noon.

While GE makes plastics and tech for autos and aviation, their financial group provides auto financing as well. So, the performance of GE in the marketplace is closely watched by auto analysts.

Aside from most auto stocks succumbing to the bearish drive downward leading up to today’s option expiration, GE led the day by opening to the upside 5.3%, after the industrial conglomerate’s profit jumped 51% and revenue also beat Wall Street’s estimates.

According to the news release and conference call, there was a pickup in orders for big-ticket equipment and services.

According to MarketWatch.com, GE reported its financial-services arm saw a decrease in real-estate delinquencies for the first time in more than two years.

That’s a good sign for the auto industry, as any improvement in the economy will likely have a positive effect; considering all the pent up demand for cars due to an aging fleet.

At GE Capital, segment earnings climbed to $1.1 billion from $99 million. Volume was up 30%, while losses and impairments declined from the third quarter to $2.5 billion.

Also, President Barack Obama recently named GE Chairman and CEO Jeff Immelt as chair of his outside panel of economic advisors: the President’s Council on Jobs and Competitiveness. Immelt’s new role is part of a long history of public service among GE’s leaders.

On the chart technicals side, one can see today’s gap at the open. How far and how long this will run is anyone’s guess, but the fundamental changes by GE imply the company’s business is indeed in order.

Market technicians will likely point out that gaps often get filled on market pullbacks, no matter what the fundamentals say.

Disclosure: Frank Sherosky, creator of the chart and author of "Awaken Your Speculator Mind" does not hold any stock or option positions in GE at this time.