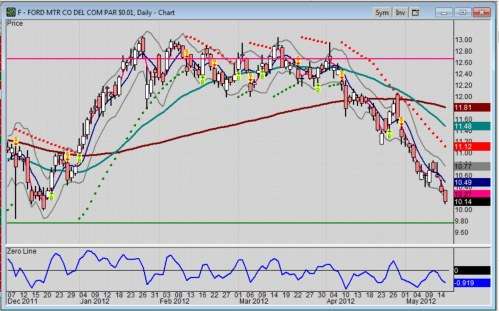 It was the end of April when I last reported that Ford Motor Company (NYSE: F) stock was in the doldrums for a reason. Well, since then the technicals have turned worse. Is it time to buy or stay out?
Advertisement

Ford Motor company (NYSE: F) stock closed Tuesday at $10.14 still above but diving fast toward that key support level of 9.75, where buyers overcame sellers in the past.

Perhaps it’s not Ford’s fault anymore than it is GM’s fault that its stock has been tanking along with the rest of the market. After all, this is May, the anniversary month of the great flash crash; and people are skittish. However, anytime Ford stock tests the $10 mark, one has to wonder if this is a gift that will pay off for investors who believe in the fundamental outlook of the Blue Oval.

Perhaps it’s all a matter of perspective even more so this time; often is with market entities. After all, May is also the month when the adage, ‘Sell in May and go away’ is invoked by many talking heads on CNBC. After the sell-off these past two weeks, though, it is hard to dismiss.

Main question is, how long shall we stay away? And should we stay away from everything that is an equity? Is Ford an exception considering its product lineup and EcoBoost™ line of engines, not to mention its new hybrids followed by that new Ford Focus EV?

Not too much has changed for Ford stock since I reported last, except the trend bias towards the downside has indeed gotten worse. Sure, this Friday is option expiration, when volatility fills the air for all stocks. Then again, the JP Morgan (NYSE: JPM) bank trade bumble of $2 billion, along with Greece who still cannot decide on how austere it needs to be, are taking its toll on trading mindsets these days; albeit JPM had a decent day today rebounding.

Looking above at the Ford stock chart, though, we still see 12.65 as major resistance which has been tested and failed; and 9.75 as a lower support level about to be tested. Recall, that 9.75 level gets repeated as far back as 2010. One important difference this time, though: Ford stock has been accelerating its dive toward that 9.75 level; perhaps too fast to stop right at that level, or perhaps it’s option expiration volatility in action.

Regardless of your own analysis or trend bias, the technical patterns and levels such as these that define the limits of any stock’s price dynamics do not lie. It is the only real truth that we have. Support implies a level where buyers came in the market in the past; resistance implies a level where sellers took control. That being noted, Ford’s stock pattern is still far from bullish.

Some traders, though, prefer to buy when all others have given up hope, especially the rookies and the uneducated; where their blood is in the streets as they say. Well, my own chart reading methods prefer to see proof of a turnaround let alone a pause, whether bloody or not.

The next lower level for price support is 9.05 for Ford which dates back to early October, 2011. After that, I see on the weekly chart, multiple levels all the way down to the depression levels of 2009 at 1.01. And while I do not foresee Ford stock going that low, that is just an opinion. I prefer to let the chart tell me what level buyers were willing to come back into the market.

Aside from that extreme, once in a generation low, the next key set of price support levels for Ford stock are: 6.61 and 5.30, which coincides with the trough of the 150-week weighted moving average.

As I wrote last time, believing in Ford for the next few years could make you see this downdraft as an opportunity to buy. Still, at what price might that be? Nobody wants to pay retail when you might get shares at wholesale by simply being a little more patient. Then again, missing a turn in price really ticks me off at myself, a personal fault, by the way.

In my opinion, this option expiration is an opportunity with high probability written all over it, at least in my mind. Think for a moment: It is a repeatable, man-made event that occurs very month; and is often a time for volatility, which astute option traders often sell puts because they get paid to wait. At no other time will there be that kind of spike in volatility and option prices, except some major news event.

Point is, that might be one opportunity to take advantage of this month, despite the May adage. After all, you know the downside risk; as Ford is not likely to go out of business, unless the banking system gets the flu again. And if that was to occur, I see the Fed’s printing presses for QE3, 4 and beyond.

For the record, I still do not own any Ford stock at present; and my rationale has been sound. I wanted to be patient and look for a valid cause to go long. I did in the past sell put options and made out quite well. So, I’m looking to do the same again.

On the weekly chart which shows greater time spreads, the 50-week WMA is below the 150 week WMA; so that’s still bearish by every technical observer. And the daily chart went further south about 8 days ago with Ford stock’s 50-day WMA (weighted moving average) breaking below the 150-day WMA. It doesn’t get much more bearish than that; which is exactly why selling put options for income might make sense here, at least for me who has a trader mindset; but only IF the volatility drives the option premiums high enough to make the exercise worth it.

By the way, that blue line under the main chart reflects my latest proprietary indicator, designed and developed by yours truly; and its crossover of the zero line signals are reflected within one day to the B and S designations by the price bars or candles. I will soon apply it to a list of screened auto stocks and auto-related stocks so as to determine which are in bullish mode as opposed to those which are in bearish mode; and I will share what I find. So stay posted to TorqueNews for your auto stock chart perspective.

Frank Sherosky wrote on May 15, 2012 - 6:01pm Permalink
Just checked the premiums on Ford put options, and the volatility is lower than I expected. Need more volatility to pump up those premiums to make this strategy work or at least worth my time. So, I guess that means back to watching the support levels for that turnaround cue.