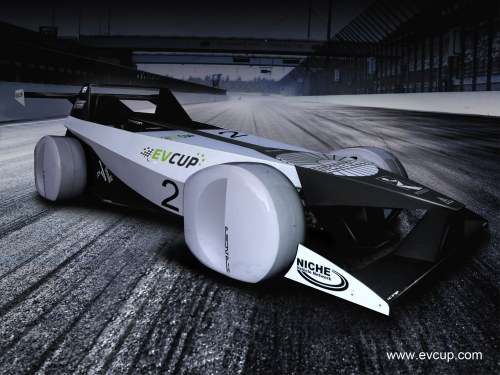 As the organization unveiled plans for the launch of its inaugural 2011 season, it also announced a newly-formed partnership with CAA Sports, a division of Creative Artists Agency.

CAA is the world’s leading entertainment and sports agency, representing many of the most successful professionals working in film, television, music, sports, video games, theatre, and the Internet, and provides a range of strategic marketing and consulting services to corporate clients.

According to the EV Cup news release out of London, the historic, seven-race green motorsport series, the EV Cup, will include two principle classes of zero emission electric cars: The City EV cars and the Sports EV cars.

While the City EV cars will allow drivers to compete in carbon-free, race-prepared urban THINK cars, the Sports EV class (see photo) will feature teams racing 185 KPH Westfield iRacers. Models of the THINK City EV Cup Edition and the Westfield iRacer are on display at the International Autosport Show.

A third category, the Prototype EV class, will not feature races, but rather base its results on time trials that showcase the latest non-production electric vehicles on circuits through street and race courses.

Planned races in the EV Cup are being staged in the UK, Portugal, Spain, and the United States, with a city street race also expected to take place in the near future . Several tracks and dates in the UK have already been confirmed, including Silverstone - 6 August, Snetterton - 20 August, Rockingham - 10 September, and Brands Hatch - 23 October.

Former Formula One British champion Damon Hill is a supporter of the EV Cup. “I think the time is fast approaching when we will have to rethink our expectations regarding private road transport generally. The advantages of electric vehicles in urban environments are too many to miss. Less noise and less direct pollution are just two. The race is to save the planet from us! Racing electric vehicles should convince the wider public of their potential. Racing was initially used to develop and prove a new product called the motor car. I see no reason why electric vehicle development will not benefit in the same way. Who knows what is ultimately possible?”

Race day will include qualifying rounds and all car batteries will be recharged at on-site facilities. Each sprint race will be contested over 20 to 30 minutes of competitive laps.