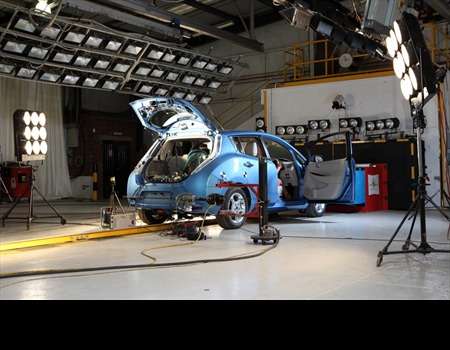 Euro NCAP, officially known as European New Car Assessment Program, organizes crash-tests and provides motoring consumers with a realistic and independent assessment of the safety performance of some of the most popular cars sold in Europe. That now includes plug-in electric vehicles.
Advertisement

Placed at the center of attention of the Euro NCAP quarterly release is the five-door mid-size electric hatchback Nissan LEAF, the first of its kind to achieve Euro NCAP 5 star overall rating. The LEAF has a specially designed battery pack below the rear-seat compartment, making sure that not only occupants are well protected in a crash, but also that the risks of battery damage or high voltage leaking are reduced to zero.

Today, more than ever before, safety sells cars. That especially applies to Europe as well as America, but includes Japan, Australia, Korea and China. For car buyers it is a key element of consumer purchasing decision, but will now include EVs.

Established in 1997, Euro NCAP is composed of seven European Governments as well as motoring and consumer organizations in every European country. Perhaps its closest American counterpart is the National Highway Transportation Association known as NHTSA along with Consumer Reports.

Nevertheless, Euro NCAP has rapidly become a catalyst for encouraging significant safety improvements to new car design. It is the organization’s hope that when buying a new car, Euro NCAP will help consumers choose safety!

By law, as in most countries, all new car models must pass certain safety tests before they are sold. For example, the impact tests are based on those developed for legislation by the European Enhanced Vehicle safety Committee (EEVC) for frontal and side impact protection of car occupants and for the protection of pedestrians hit by the front of cars.

But legislation provides merely a minimum statutory standard of safety for new cars. Thus, it is the aim of Euro NCAP to encourage manufacturers to exceed these minimum requirements.

Since 2009, Euro NCAP only releases one overall star rating for each car tested with a maximum of five stars. This overall safety rating is composed of scores in four areas:
1) Adult Protection,
2) Child Protection,
3) Pedestrian Protection
4) Safety Assist

The overall score is calculated by weighing the four scores with respect to each other, while making sure that not one area is underachieving. The underlying dynamic tests are identical to those before 2009, except for the addition of a test for Whiplash neck injury protection in rear impact.

For the record, there is a growing concern over the safety of small cars, but even more for EVs. The main concern is over the potential for fires, not because of fuel, but high voltage which may short and ignite a fire, especially after a crash or in a garage charging.

On the 25th of August 2010 Euro NCAP announced that it would commence its focus on Plug-In vehicles. Early 2011, the first results of full electric vehicle tests were to be released. Torque News will monitor these reports.

As testing electric vehicles is new to Euro NCAP, additional preparations and
precautions were taken to ensure safety before, during and after testing for all persons involved. Tests with Plug-In vehicles would, therefore, only be performed at crash laboratories whose personal was trained to work with high voltage vehicles.

In general, Euro NCAP says it will not treat Plug-In vehicles different to any other vehicle assessed. However, after each crash test, extreme care needs to be taken to ensure that there is no high voltage exposed before anybody touches the vehicle.

Immediately after test, for example, the ignition is switched off and if possible the service plug is removed. For storage, inspection and viewing the OEM is asked how to discharge the complete high voltage system so that there is no remaining energy.