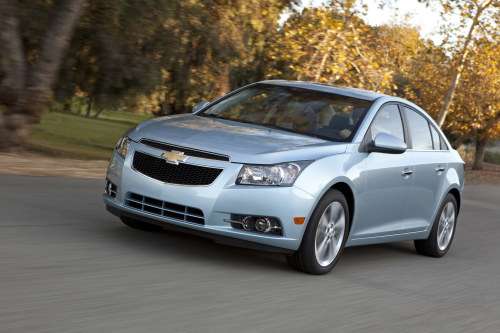 Since 2009, the Chevrolet global brand has outpaced the auto industry. Now for the first three months of 2012, Chevy achieved a 6.5 percent increase over the first quarter of 2011.
Advertisement

Chevrolet is holding its head high these days and with good reason. According to the latest GM news release, Chevrolet sold 1.18 million vehicles worldwide in the first three months of 2012. That’s a 6.5 percent increase over the first quarter of 2011, marking this the sixth consecutive quarter of record-breaking sales for the brand.

Of course, this kind of sales record bodes well for General Motors Company (NYSE: GM), whose stock has been languishing ever since its IPO in November, 2010. This past week, though, has seen the stock follow the general market into option expiration. Question is: when will GM stock reflect this kind of good news about global sales growth?

For the record, in the last two calendar years, Chevrolet has grown faster than other high-volume global brands, bringing its global market share to 6.3 percent.

“The strongest lineup of cars, trucks and crossovers in Chevrolet’s history delivered record-breaking sales in 2011 and equally impressive results in the first quarter of 2012,” said General Motors Chairman and CEO Dan Akerson. “To keep our momentum going, GM has more than 20 major vehicle launches in 2012, and some of the most important are Chevrolets, including the Sail in Asia, the Colorado in South America and the Spark in North America.”

The Chevrolet Cruze led the brand with global sales of more than 180,000 in the first quarter, a nearly 20-percent increase over 2011, making it the best-selling Chevrolet nameplate around the world. In addition, sales of the recently launched 2012 Aveo/Sonic small car and 2013 Malibu mid-size sedan are increasing as more vehicles become available in dealer showrooms.

Other major Chevrolet launches include the Trailblazer mid-size SUV in Thailand and Cruze station wagon in Europe. Chevrolet, traditionally an American brand, today records more than 60 percent of its sales outside the U.S. market.

Founded in 1911 in Detroit, Chevrolet is now one of the world's largest car brands, doing business in more than 140 countries and selling more than 4 million cars and trucks a year.

As part of full disclosure, while I still drive my 2008 Chevy HHR, my wife drives a 2012 Chevy Cruze and loves the car beyond the Chevy Cobalt which the Cruze replaced. The interior reminds her of our 2005 Cadillac CTS with its two-tone color scheme, layout and comfort.

My only complaint is the shift point at gear 3 of the 6 speeds when the car is cold. It has a major delay at times, making me wonder if the gear actually disengaged. After it warms up, all is well, though.

All in all, even I feel the car is a major step up in quality, comfort and performance as one of the brand’s major representatives. So, it is no surprise to me or my wife that Chevrolet is being accepted as a great value around the globe. Sure there are other fine cars out there, but the price point of the Chevy Cruze along with its size, for example, gives it the edge, in my opinion.

LG's New EV Battery Plant Is a Welcome News for Tesla
Tesla Giga Berlin's New Hurdle: It's Not Only the Gov't, but Now Tesla Itself
END_OF_DOCUMENT_TOKEN_TO_BE_REPLACED