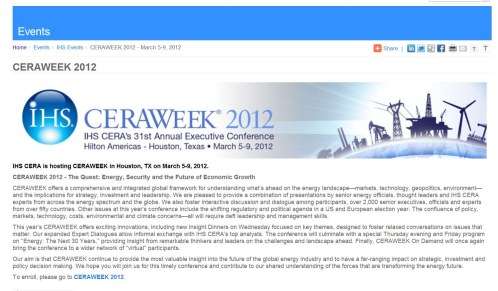 CERAWEEK 2012: Oil companies agree natural gas is the fuel of the future

While the Wall Street Journal reported first at CERAWEEK 2012, the IHS Cambridge Energy Research Associates’ annual conference in Houston, it raises even greater questions about infrastructure for natural gas as a transport fuel.
Advertisement

The CERAWEEK web page states that it offers a comprehensive and integrated global framework for understanding what’s ahead on the energy landscape—markets, technology, geopolitics, environment—and the implications for strategy, investment and leadership. Other issues at this year’s conference include the shifting regulatory and political agenda in a US and European election year. The confluence of policy, markets, technology, costs, environmental and climate concerns—all will require deft leadership and management skills.

I have written so many times on natural gas that it borders on nausea. Albeit I spent over 39 years in the auto industry as a design engineer, it’s just great to read another opinion, especially by the WSJ, which has a unique set of credentials that literally backs up most of what I’ve been reporting here at TorqueNews. Well, not in totality, but strong where it counts.

This time I refer to a report by the Wall Street Journal on-line that published a report from a Deal Journal colleague, Angel Gonzalez, who filed a dispatch from the IHS CERA energy conference in Houston.

Perhaps the latest news by General Motors Company (NYSE: GM) that it will offer nat-gas option in a bi-fuel system is making enough waves about natural gas that it is finally worthy of reporters’ time and efforts. Good! Read: GM stock down despite news of nat-gas 2013 Chevrolet Silverado and GMC Sierra 2500 HD .

I agree, there is still a problem with nat-gas, though. There is still too much uncertainty simply due to the billions of dollars of infrastructure costs. Sure, America has plenty of supply, but not enough stations to deliver. From my own research, there are over 900 stations in America that deliver nat-gas; but only half are open to the public.

Furthermore, the OEMs have barely scratched the surface in design development of revising their vehicles to handle a bi-fuel or a even a single fuel which favors nat-gas. GM’s truck announcement is major step, as are the nat-gas options for commercial trucks, including the conversions of the big rigs.

The article by Mr. Gonzales thus raises an interesting perspective when it states, “to meet global energy needs it must wager billions of dollars on long-term projects that can be rendered useless overnight by new developments.”

I see the point but only to a degree. What new developments? Electrification? EVs have their own set of infrastructure problems let alone high cost of batteries. Hydrogen is in the same situation with infrastructure. Only gasoline has sufficient infrastructure in place.

When you think about it, though, a nat-gas infrastructure would at least be a stepping stone toward hydrogen, and towards fuel cell electric vehicles.

In the meantime, that means my article on Algae Fuel is likely the better choice from that perspective as well, in the transitional sense that we can get a replenishable liquid fuel; but commercialization and production will take years to develop as well. That means we are left with the obvious: someone or some group MUST choose a fuel and stick with the consequences.

In the corner of nat-gas, algae fuel and even gasoline and diesel, at least the engine technology is getting ready. I refer, as always, to the HCCI engine that runs like a diesel; the split-cycle hybrid of Scuderi and Tour, and the external combustion closed-loop steam engine of Cylone Power (Nasdaq: CYPW), which is already deemed a game changer by the military and its suppliers.

Import-export dilemma: A bunch of U.S. liquefied natural gas terminals were built in the last decade, at the cost of tens of billions. Gonzales writes that the expectation was that shiploads of the stuff from Africa and Trinidad would be quickly snapped up by energy-hungry U.S. consumers. That did not happen, because we literally found our own supply.

So, in that respect, I get it; changes can occur quite quickly. However, the engine technology can handle any fuel. We just have to decide which one will best suit our progression toward cleaner fuels.

Frankly, that is one dilemma I do not mind owning. Imagine a home-grown supply of transport fuel, and all we have to do is make the switch. I would think with gasoline nearing $4 and up that we Americans would jump at the opportunity. Where’s our national energy policy which would lead the way? So much for the slogan, Yes, We Can!