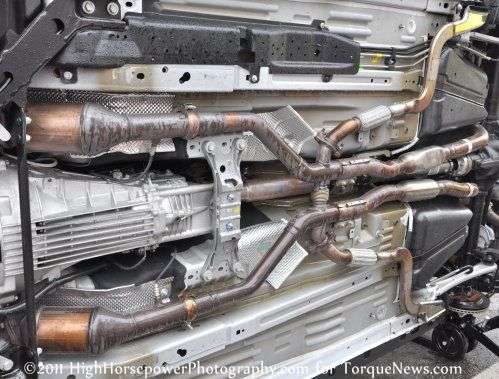 Amazing things happen at the nanoscale, at least according to the scientists at the National Synchrotron Light Source (NSLS) at Brookhaven Lab. Think capturing energy lost as heat in automotive and factory exhaust.
Advertisement

According to official release documents from the Brookhavens Lab, scientists have discovered that a class of materials known to convert heat to electricity and vice versa behaves quite unexpectedly at the nanoscale in response to changes in temperature. The two scientists are Simon Billinge and Emil Bozin.

The discovery was also described in the December 17, 2010, issue of Science as a new “opposite-direction” phase transition that helps explain the strong thermoelectric response of these materials. It may also help scientists identify other useful thermoelectrics.

To understand the phase transition the scientists observed, think of the everyday response of a gas like steam cooling to form liquid water, and then freezing to form solid ice. In each case, the atoms undergo some form of structural rearrangement, explains Simon Billinge, a physicist at Brookhaven Lab and Columbia University’s School of Engineering and Applied Science and a lead author on the Science paper.

Here is the discovery in scientific but logical terms: As the emergent-dipole material is warmed, fluctuating local dipoles appear from an undisturbed ground state (i.e., from “nothing”). This is in contrast to conventional materials, which have aligned dipoles at low temperatures. The flip-flopping displacements of this new phase impedes the movement of heat through the material, allowing a strong temperature gradient to be maintained.

It is this temperature gradient that’s key to electron flow. Heat on one side of the material can then induce a flow of electrons from the hot to the cooler side. Capturing this current could put waste heat to work.

Thinking beyond the norm

One still might wonder how converting automotive exhaust heat into electricity will be useful in the automotive product sense. Think of supporting the electrical load whenever the entire engine is shut off as some systems do today. Fact is, GM invented eAssist™ as a battery backup to support the electrical system under those very set of circumstances.

Moreover, think of the Chevy Volt’s generator engine. After the first 40 miles, that range-extending engine kicks in and uses gasoline which creates heat but dumps it as waste out of the exhaust. This new discovery might allow engineers to one day recapture that kind of waste heat and feed it back into the battery in the form of electricity, thus creating an energy loop, and thus a more efficient system.

The same could be used with external combustion engines (ECE), like the Cyclone Power engine which reintroduces steam power to automobiles. Even that engine can act as an efficient power source for a generator. Point is, any phase-change analogy and application was not lost on the scientists either.

Since this research was funded by the DOE Office of Science, the Office of Naval Research, and the National Science Foundation, the newly available experimental techniques and theoretical approaches are paying off. Scientists can now “see” and model behavior of individual atoms at the nanoscale, or on the order of billionths of a meter. With those tools they were able to observe subtle changes in atomic arrangements invisible to conventional probes of structure.

Toyota's First EV Will Have a Name of BZ: Toyota BZ
First Videos From Inside The Boring Company's Las Vegas Loop
END_OF_DOCUMENT_TOKEN_TO_BE_REPLACED