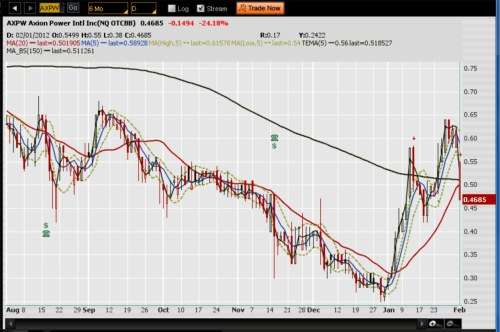 Axion Power announces stock offering of up to $10 million

Axion Power International, Inc. (OTC Bulletin Board: AXPW) today announced in its news release that it has entered into definitive agreements to sell an aggregate of not more than 28,571,429 shares of common stock, par value $0.0001 per share, at a price per share of $0.35 for gross proceeds up to $10 million, before deducting placement agents' fees and estimated offering expenses.

The stock opened lower on the news. This is not unusual considering that more stock is being creating which dilutes existing shares on the market. For the record, this reporter has covered this company before, and has disclosed a small position in a long-term IRA.

The Shares are being offered directly by Axion pursuant to an effective shelf registration statement previously filed with, and declared effective by, the Securities and Exchange Commission on July 14, 2011. The Company anticipates that the net proceeds from the offering will be used for working capital, capital expenditures and general corporate purposes. The closing of this offering is expected to occur on or about February 3, 2012, subject to the satisfaction of customary closing conditions.

Philadelphia Brokerage Corporation and Emerging Growth Equities, Ltd served as co-placement agents for the offering. When available, copies of the prospectus supplement and the accompanying base prospectus relating to the offering may be obtained from the Securities and Exchange Commission.

Since investors like to track disruptive technologies, it appears they now have one, though, with Axion Power; which takes a novel electrode approach to increasing charge/discharge rates for a new PbC (lead-carbon) battery for stop-start applications. Thus the connection to automotive is real and directly related to the electrification. Read: Axion Power to improve stop-start systems with new PbC battery electrode

Tests do show that battery technology is advancing to meet the demands of the electrification, whether full or light, for the automobile. And that’s good for the auto industry and for the consumers who, considering the economic times, need cheaper technologies to do the same amount of work.

As you can surmise, Axion Power International, Inc. is the industry leader in the field of lead-acid-carbon energy storage technologies. As such, Axion believes this new battery technology is the only class of advanced battery that can be assembled on existing lead-acid battery production lines throughout the world utilizing Axion's proprietary carbon electrodes.

Axion's future goal, after filling their plant's lead-carbon battery production capacity, is to become the leading supplier of carbon electrode assemblies for the global lead-acid battery industry. And never forget, the new technology for this lead-acid battery has a cost and functional advantage over lithium-ion batteries, especially when used with stop-start systems. So, while the stock may be diluted for the moment, the potential for the technology and the company is still long-term positive, in this writer's opinion.

LG's New EV Battery Plant Is a Welcome News for Tesla
Tesla Giga Berlin's New Hurdle: It's Not Only the Gov't, but Now Tesla Itself
END_OF_DOCUMENT_TOKEN_TO_BE_REPLACED