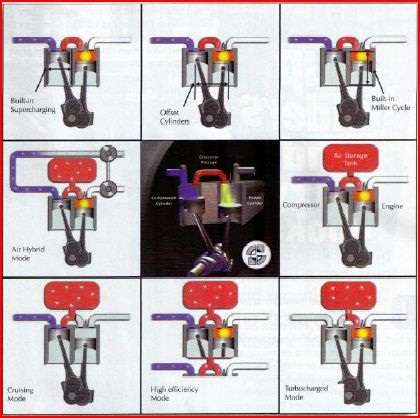 While some private investors in Scuderi Engine Group express their dismay at the delay in OEM acceptance of the evolutionary split-cycle engine, the realities of today’s automotive business models are clear, as my interview with Stephen Scuderi at 2013 SAE World Congress in Detroit revealed.
Advertisement

Anyone who has ever dealt directly with the automobile industry (like me for over 39 years) eventually learns that building a business case is part of the corporate and industrial game, and is absolutely necessary, whether that OEM is foreign or domestic; and that especially applies to the auto industry’s review of split-cycle engine technology. Unfortunately, that is not an easy pill to swallow for many private investors of Scuderi Engine Group, developers of the split-cycle engine design that bears the name of inventor (now deceased), Carmelo Scuderi. His legacy, though, centers on performance, honesty and trust by those who knew him.

I understand why a few investors want to use blogs and writers like me to vent their frustration. I get it; but I cannot allow rumors to rule my better judgment. Like Ronald Reagan, I still believe in that old Russion proverb, “Trust but Verify.” And that is why I attended this year’s SAE World Congress, despite my retirement from full-time writing for TN, so as to concentrate on fulltime trading, not to mention to write a book or two.

Be apprised I have no financial skin in the Scuderi investing game. Yet, as an investor in post-IPO companies as well as a day trader, I fully understand investor anxiety; been there many times. That is why I teach patience with new technology acceptance, as it is par for the course.

For the record, I own shares in two publicly-traded companies with viable products, not just intellectual properties (as is the case with Scuderi) which is tougher; and I am still waiting for the stocks to breakout whereby I can feel justified in my choice and timing of investment. One is Cyclone Power (CYPW) with its external-combustion, recirculating steam engine that will test the speed record at Bonneville this year; the other is Axion Power (AXPW) with potential to use nano-material PbC electrodes for heavy truck batteries.

In my experiences, there are three major elements in building an automotive OEM business case: The first is technical; the second is financial; and the third is political, both external and internal. So, all attempts by Scuderi Group to convince the engineering level of these OEMs about the benefits of the advances but evolutionary step in IC engine development is merely part of the path towards acceptance. Ultimately, it has costs associated with it to say the least; however, even those engineers have to sell it to those above their pay grade; and, as they say in corporate political circles, that ain’t always easy.

Recall my own idea, Inherent Criteria, an internal design process that proved to save $1.92M globally per year still took General Motors six years to make the decision to make the process official. I did not give up, though, because nobody said, no or yes. It forced me to develop a sense of morbid curiosity so as to prove just how long GM managers might drag it out. Keep in mind, these were the same people who stated bankruptcy would not occur on their watch. I rest my case on that part.

Regarding the Scuderi Group’s big sell, questions will always be asked; challenges will always be placed, doubts by the over-educated but more-often ignorant elite will always exist. Main question: Do the technical and performance benefits justify the expense, not only of development, but of the changes required in manufacturing? For certain, the ability by Scuderi to retain a single crank and use the same block will go a long way.

So, there is probably a good lesson here for anyone investing in anything these days. And if anyone thinks that making an IPO for Scuderi right now would solve the acceptance problems best be prepared to change their paradigm. Again, I own post-IPOs and still wait for profit.

One good piece of news per my talk with Stephen Scuderi at SAE is this: No OEM has walked away from the split-cycle engine, contrary to a rumor or two that floated my way via email. Of course there are technical challenges, but the fact the OEMs are still here and, as Stephen alluded, coming back after a period of silence, says to me the potential is there, plus any technical challenges are not insurmountable.

Fact is, all OEMs ask questions as they should, because, they too, owe allegiance to their shareholders. They ask for more data; they even want to know if changing certain functions like direct injection as opposed to port will improve performance. That is normal automotive yin and yang. Just be apprised, each question drives more tests, more simulations, more time, even more questions; and, until those are answered, the term “risk” will dominate the OEM mindset.

There seems to be far more concern over financial risks than technological, at least the way I interpreted Scuderi’s comments. So, firing before, at, or after top-dead-center is irrelevant, because the system can handle either choice. However, I won’t feel warm and comfy until I see an engine running in a car, even if it’s merely a test unit. I respect simulations, but there is nothing like driving a car and reading actual MPG data. Recall that Bob Lutz didn’t look relieved either until he drove that Chevy Volt at the proving grounds.

It appears to me that a Gen2 engine for development is underway, and a Gen3 for a vehicle has to follow. When? In time! What can I say? Scuderi doesn’t know. For sure, the OEMs do not know yet, but the interest is there and indeed growing, despite all the electrification hoopla of OEM marketing.

In other good news, realize that no U.S. or foreign auto company will ever meet U.S. 2025 fuel mileage mandates with engines as they are designed right now. And with the bulk of propulsion systems still expected to be ICE by 2030 per government accounting, engine design changes will occur; that’s a certainty.

So, while some greenies think this is the end for the Otto Cycle as we know it, fact is, the end is not yet for the IC engine, merely its configuration of the cycle. That’s why the split-cycle engine is so important and bears so much scrutiny. It is the one evolutionary makeover not done by the OEMs; as it involves splitting the cold intake-compression from the hot power-exhaust components of the 4-cycle process. How do they do that with minimal expense? That’s key.

Just know that this is new territory for the OEMs. Never before in history did the OEMs have to deal with each part of the cycle as separate but related entities to this degree. That invokes a lot of what-ifs. That explains why, up to now, engine advances have been piecemeal; and it’s always been a compromise. So, before the OEMs officially drink the cup of full acceptance, splitting the cycle will take a bit more time to consider, develop, simulate, test, build, and test again. And 2025 mandates are still considered down the road; meaning, no need to panic on their part.

So, while there will likely be new news every now and then from SAE and Scuderi, just realize the process as I see it is going according to automotive Hoyle. Disclosure agreements guarantee that details cannot and will not be made fully public. Think far side of the moon or earth reentry; there is a blackout. My book on split cycle engines, though, will hopefully help the cause. Yes, even an insignificant, retired bloke like me can still be part of automotive history.