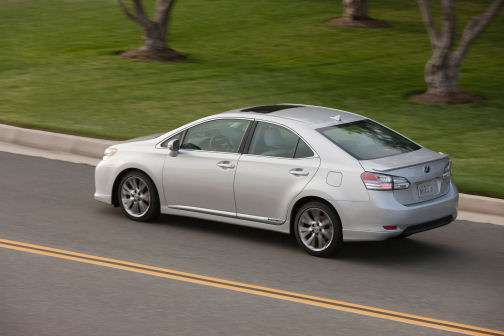 Lexus grew at a slower rate than the rest of the recovering U.S. auto industry, but at the end of 2010 it still retained its title as the most popular luxury-vehicle brand in America. But with a growth rate of barely over six percent for the year, Lexus faces a danger of being dethroned by Mercedes-Benz and BMW, which ended 2010 with strong momentum and growth rates much higher than the Lexus level.
Advertisement

The year 2010 ended poorly for Toyota Motor Sales U.S.A. as a whole, with the company seeing only a small decline in sales, but during a period in which the American auto market at large was recovering enough to exceed the prior-year, 2009 sales level by 11.1 percent. But Toyota's Lexus division, the premium-vehicle specialist, gave the company some reason for cheer. At the end of the year, Lexus retained its prior title as the top-selling luxury-car brand in the United States.

But cautions loomed. For one, the brand's momentum appeared to slow at the end of the year. For the month of December 2010, Lexus reported sales of 27,560 units, a 3.5-percent drop from December 2009, when the division moved 28,565 passenger cars, crossovers and SUVs.

By contrast, Mercedes-Benz, the nearest competitor to Lexus among American luxury-car brands, finished 2010 with a much faster growth rate of 17.3 percent. Its full-year, 2010 sales level of 224,944 vehicles put it fewer than 5,000 behind Lexus. Based on their current performance, Mercedes stands poised to handily overtake Lexus as America's top luxury-car brand by the end of 2011.

Similarly, the BMW brand increased U.S. sales by 12.0 percent in 2010. Its 2010 year-end tally of 220,113 units put it fewer than 10,000 vehicles behind Lexus. If those two brands continue at their current respective growth rates, BMW also will overtake Lexus by the end of 2011. That would plunge Lexus from first to third place in popularity among American luxury-car buyers, in the span of a single year.

Other luxury brands remained too far behind Lexus at the end of 2010 to pose any immediate challenge to its market position. The Cadillac unit of General Motors ended the year with 146,925 in sales. Audi, a division of Volkswagen, closed 2010 with sales of 101,629. Nevertheless, both brands enjoyed 12-month growth rates much higher than the Lexus 6.2 percent pace.

Among passenger cars, the best Lexus performer in percentage terms was the HS 250h hybrid sedan. With 12-month sales of 10,663 units, the car experienced 59.2 percent growth over the prior year. But the gain was misleading, because the HS was available for only about four months of 2009, after Lexus introduced the new model in August of that year.

Mirroring the situation at its parent Toyota, Lexus performed much better in the light truck category, which includes only sport-utility vehicles for the luxury brand. When combined, the Lexus LX, Lexus GX and Lexus RX accounted for sales of 116,223 units in 2010. That was a 12.6 percent improvement from 2009 sales of 103,230 SUVs.