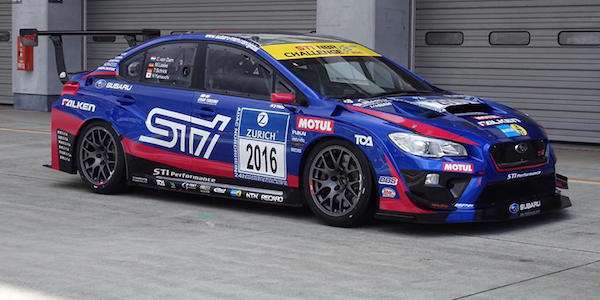 The 2016 Subaru WRX STI NBR crash won’t stop Subaru Tecnica International. Can they get the car ready in 2 months?
Advertisement

After the 2016 Subaru WRX STI Nurburgring car crashed last week, it looked like Subaru’s hopes of a title repeat were done. STI is reporting that the race is still on and the car will be ready in spite of considerable damage from the crash.

As reported last week, the 2016 WRX STI NBR was undergoing testing at the Fuji Speedway getting ready for the Nurburgring 24-hour race and a lone crash occurred going into the first corner. The driver was taken to the hospital and released with minor bruises. The car wasn’t so lucky and Subaru said it sustained “great damage.”

STI says the race is on

The 2016 Nurburgring 24-hour race is only 2 months away but STI says they will work hard to get the newly-revamped 2016 STI NBR race car ready for the grueling event. The idea was floated out there, that they might abandon the race. But after consulting with the whole team, they decided to go for a repeat win.

That’s good news for Subaru race fans who want to see the new car in action in Germany in May. Subaru won the Nurburgring 24-hour race last year and STI will compete again in 2016 and defend their title in the SP3T class (for sub-2 liter turbocharged vehicles). Subaru is competing for the 9th consecutive year and has won the grueling race three times, in 2011, 2012, and 2015.

It’s all about team cooperation

Tatsumi Eiji general director of STI motorsports says, "We apologize for any concern to you at this time, but you don’t need to worry. You can keep cheering for the team because even though there was crash, we have decided to meet the challenge and run in the Nurburgring 24-hour race.” He went on to say. “It will be a big challenge to get the car ready, but the STI team will show what the power of cooperation can do. And in one mind, we aim to win 2 consecutive titles at the Nurburgring.”

The newly-revamped 2016 WRX STI Nurburgring race car is undergoing repairs in Japan and will be ready for testing. The 24-hour race is May 28-29, 2016. Now Subaru has two races to win. Will they have the car ready in 2 months? Stay tuned.