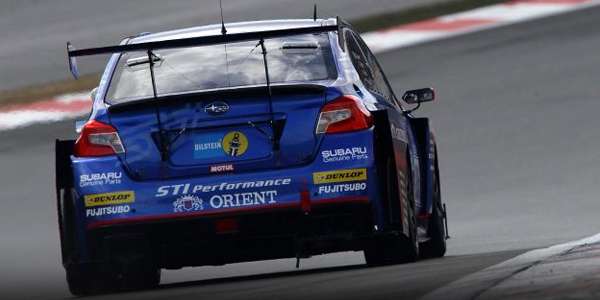 The new 2016 Subaru WRX STI Nurburgring race car crashes during a practice session. How much damage was there?
Advertisement

The 2016 Subaru WRX STI Nurburgring 24-hour (NBR) race car was in a crash yesterday. Fuji Heavy Industries (FHI) reported that the 2016 WRX STI NBR was undergoing testing at the Fuji Speedway getting ready for the Nurburgring 24-hour race and a lone crash occurred going into the first corner.

They haven’t released many details, but FHI said the WRX STI race car sustained significant damage. Yamauchi, one of the drivers from last year, was behind the wheel when it crashed. He suffered minor bruises on his right shoulder and was taken to the hospital where he was later released. FHI says the cause of the crash is currently under investigation.

Subaru won the Nurburgring 24-hour race last year and STI will compete again in 2016 and defend their title in the SP3T class (for sub-2 liter turbocharged vehicles). Subaru is competing for the 9th consecutive year and has won the grueling race three times, in 2011, 2012, and 2015.

FHI will release more details after the team finds out what happened to the new 2016 Subaru WRX STI NBR. STI will need to make repairs quickly and get the damaged car back on the track for additional testing. The 24-hour race is May 28-29, 2016. Stay tuned.

Tesla Giga Berlin's New Hurdle: It's Not Only the Gov't, but Now Tesla Itself
Teslas Are Sold Out Until 2023, But The Timing May Reverse
END_OF_DOCUMENT_TOKEN_TO_BE_REPLACED