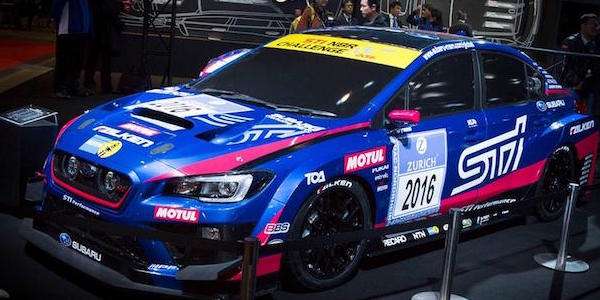 The 2016 Subaru WRX STI will attempt to win the Nurburgring 24-hr race again this year. Will 5 new improvements help them do it?
Advertisement

Where else can you experience over 200 vehicles driving at full speed for 24 hours around the longest racetrack in the world? It’s the Nurburgring 24-hour race, and Subaru is ready to make it two wins in-a-row in the new 2016 WRX STI race car. Subaru is competing for the 9th consecutive year and has won the grueling race three times, in 2011, 2012, and 2015. Can they make it two in-a-row again? Five new improvements could help them do it.

5 improvements made to WRX STI

The 2016 Subaru WRX STI NBR gets new improvements and will get a lighter body, reduced inertia moment, better aerodynamics and enhanced front downforce. The new WRX STI also gets new tires. STI had to change the engine settings suited to smaller restrictors resulting from regulation changes. Subaru says the new changes to the WRX STI NBR car will make optimum use of the low center of gravity and superior balance of the horizontally opposed engine to improve cornering speed.

Can STI pull off another win at the Nurburgring 24-hour race in Germany? The 2016 Subaru WRX STI gets new improvements and will be ready to defend their title. The race is May 28-29, 2016. Stay tuned.

Check out the Subaru x STI STILE video below.