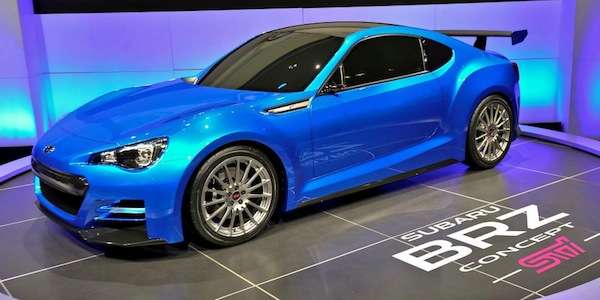 Will new Subaru BRZ go back to its STI roots?

Subaru sells its 20,000th BRZ sport coupe in December. What will Subaru do with the next-generation sports coupe?
Advertisement

The Subaru BRZ started out as a BRZ Concept-STI and it may need to go back to its roots. Subaru is committed to the BRZ and President of Fuji Heavy Industries (FHI), Yasuyuki Yoshinaga, confirmed a new-generation Subaru BRZ/Scion FR-S/Toyota GT86 is coming. It’s a good thing because Subaru’s BRZ is losing traction with buyers. Subaru of America reports that the 20,000th BRZ sold in U.S., but the sports coupe has seen a decrease in sales of 12.61 percent in 2014. The rear-drive sports car also saw a 40.99 percent decrease in sales in December. Subaru needs to do something to get buyers excited again about the coupe.

The Subaru BRZ started out as a BRZ Concept-STI that created lots of excitement when it was first introduced at the 2011 Los Angeles Auto Show. It represented a lightweight performance sports car combined with the race-bred refinements of STI, the performance brand of Subaru. It came with a number of STI performance enhancements that set it apart from the production model.

The lightweight BRZ Concept-STI - featured an STI-tuned suspension, Brembo brakes and unique 18-inch wheels and tires. The Subaru-engineered and built chassis boasted a rigid frame housing, a two-plus-two interior and front engine/rear-wheel drive layout. With the engine mounted low and rearward in the engine compartment near-perfect balance was achieved. It did feature the 2.0-liter naturally aspirated boxer engine that is still in the 2015 BRZ today.

BRZ was born from a desire from Subaru and Toyota to build a sports car which was built only to the mantra of “sheer driving pleasure.” They succeeded in a big way and the car performs like more expensive sports cars due to its low center of gravity concept. The front driveshafts were removed and the engine placed as low and as far back as possible, both of which to ensure the weight was in exactly the right place.

BRZ needs to go back to its roots

Subaru is tight-lipped about any future plans for the next-generation BRZ, but we hope they will go back to its roots and give fans an STI-developed sports coupe. It needs more than just a refresh of the exterior styling, and needs to have performance upgrades to the suspension and drivetrain. BRZ is already a great driver’s car with superior driving dynamics and the platform is there for Subaru to come up with the next-generation model that would excite fans and bring in new buyers. Many fans would like to see a 2.0-liter turbo engine and enough STI upgrades to take the rear-drive coupe to the next level of performance. Stay tuned.