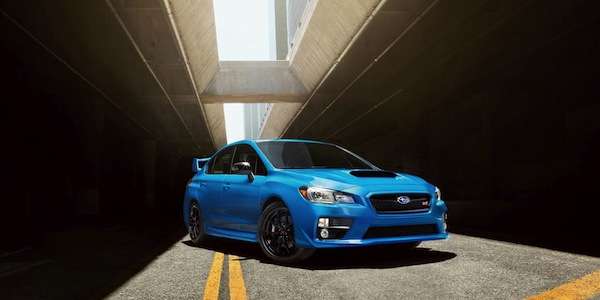 Will limited edition 2016 WRX STI be a collector's car?

The 2016 Subaru WRX STI and BRZ Series.Hyper.Blue models are coming soon. Will they become collector cars like the Australian 2012 WRX Spec 11?
Advertisement

They were first introduced in the U.S. to fans that attended the Wicked Big Meet in Stafford Spring, CT, and the 2016 Subaru WRX/STI and BRZ Hyper Blue models are also coming to Australia. Down under, performance fans will also get a 2016 Hyper Blue WRX. Subaru of America just announced pricing on the limited edition models for the U.S. market.

In the U.S., performance fans will see 700 examples of the 2016 WRX STI and 500 2016 BRZ Series.Hyper.Blue models. 2016 Subaru WRX performance sedans are not be offered in this special color and trim in North America.

In Australia, performance fans will only get 300 of the special edition variants and they will likely go fast, especially the WRX and WRX STI performance sedans. Subaru Australia says sales of both the new-generation performance sedans are up 7.7 percent year-to-date to the end of July, selling at a clip similar to the late 1990s “heyday” of the Mark 1 originals.

Subaru's managing director in Australia, Nick Senior, believes the cars could become a collectors item to rival the Club Spec WRX models of the past. They only produced 300 2012 WRX Spec 11 models and they went quickly. The special edition WRX’s were available in either black or tangerine orange with black 17-inch alloy wheels and an STI rear spoiler. For a little extra cash, buyers could get an STI package that included a front lip spoiler, short shifter and strut brace.

At the announcement of the Hyper Blue models Senior says, "We feel that like many other of our special edition colors in the past, these vehicles will be keenly sought after in the years to come. There's always massive interest in our sports special edition versions. Combine that with their proven track record of excellent retained value, and you have every reason to get the blues."

Will the U.S. Series.Hyper.Blue WRX STI and Australian Hyper Blue WRX/STI become collector cars? Hagerty recently released their “hot list” of future classics and the 2015 Subaru WRX STI Launch Edition made the list. You won’t find one on dealer lots unless it’s a pre-owned model because Subaru only produced 1000 of the special edition STIs.

The STI Launch Edition paid special homage to the Brand’s rally racing heritage with it’s iconic WR Blue Pearl exterior paint and Gold BBS alloy wheels. The 1000 examples that made their way to U.S. shores originally sold for $38,190 and Hagerty says the Launch Edition is destined to become a collectors item.

The 700 U.S. examples of the 2016 Subaru WRX STI Series.Hyper.Blue models will go on sale this fall. They will also likely sell quickly to those who like the color. They don’t hold the tradition the iconic World Rally Blue Pearl color the Launch Edition models have. We don’t think they will become collector cars like the Australian 2012 WRX Spec 11.