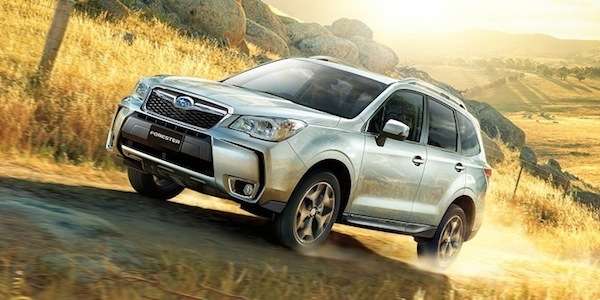 For the very first time, Subaru will offer a 2015 Forester diesel with a CVT automatic in Australia. Can Subaru catch Mazda and Toyota?
Advertisement

Until now, the Subaru Forester equipped with a diesel has only been offered with a manual gearbox. Subaru announced the Australian market will get the new 2015 Forester diesel with a Continuously Variable Transmission (CVT) automatic for the first time. Subaru has also cut the price of the Forester and hopes the other changes will power new sales for the new generation SUV.

Subaru hopes the new 2015 Forester diesel CVT and price cuts will help the brand close the gap between the top selling Mazda CX-5 and second best Toyota RAV4. In 2014, the Forester was the third-best selling SUV in its segment. Subaru cut the price by $1000 in January and now the Japanese automaker has dropped the base-grade variants and signaled further price cuts of up to $3500 on some models.

Pent up demand for a Forester diesel automatic

According to Subaru Australia Managing Director, Nick Senior, customers have been asking for an automatic diesel variant. Senior said, “The addition of the CVT to the Forester diesel is a huge boost to the range. We know through our dealer network that there is significant pent-up demand for Forester auto diesels, not least in regional and rural areas, where the benefits of fuel efficiency in long-range driving really come to the fore.”

The 2015 Forester range also gets other upgrades for the 2015 model year that Subaru hopes will help gain new customers. The new features include, a new level of on board information and entertainment, and speech recognition across a wide range of key functions. Subaru says the diesel variant will be quieter and gets “new refinements for better response. Automatic-equipped diesel Forester vehicles also get the X-Mode off-road system.

Across the 2015 Forester range, they will now all come with Shark fin radio antennas, heater controls and air vent designs have been changed and Forester SUV comes with upgraded steering wheel satellite switches.

Because of this pent up demand for a diesel automatic, Senior predicts the new diesel Forester with the CVT will add 200 sales per month putting it within striking distance of the Toyota RAV4. The new 2015 Subaru Forester diesel CVT comes to Australia for the first time and gives the brand a new model in the lineup to attack the competition. Can Forester catch the CX-5 and RAV4?