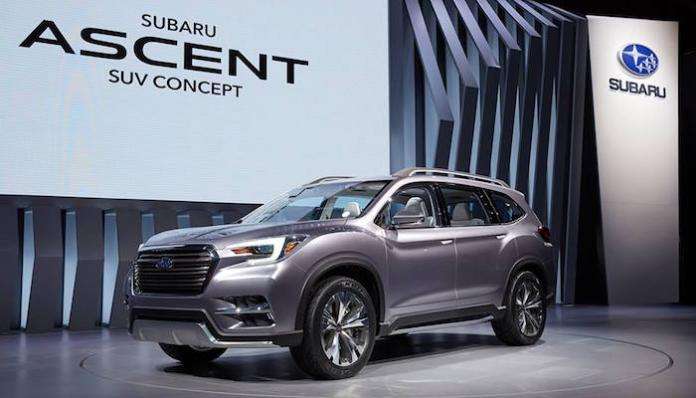 The all-new 2018 Subaru Ascent 3-Row SUV is coming next year. Will consumers buy it if it has hybrid power?
Advertisement

The all-new Subaru Ascent 7-passenger Crossover is coming soon, it will be built in the U.S., and it could get hybrid power. It’s all part of Subaru Corporation’s plan with their Subaru Global Platform that all new-generation Subaru vehicles will ride on.

Subaru says the new global platform will allow a single concept design for development of all models, adaptable to Plug-in-hybrids and even electrification in the future. All Subaru vehicles will be able to be designed with gasoline boxer engines, hybrid powertrains, plug-in hybrids, electric cars, and other types of alternative power units for which demand will increase further.

The 2018 Crosstrek crossover will be the first Subaru to get hybrid power and it could come as soon as late 2017. The new Ascent 3-Row family-sized SUV that will be sold in the U.S. and built at the newly-expanded plant in Indiana, will replace the outgoing Tribeca and will fit well into Subaru’s all-wheel-drive recreation-purposed lineup. It will likely be powered by a new plug-in hybrid powertrain after it’s initial launch in North America.

Will consumers buy an Ascent Hybrid?

Crosstrek hybrid sales weren't that good when it was available. At a $4800 premium over the gas model, most buyers weren’t willing to pay the extra dollars for the 3 mpg increase in fuel mileage with the Crosstrek hybrid. With gasoline prices hovering around $2.50-$3.00 a gallon, compact crossover buyers weren't going to shell out nearly $5000 extra over the standard Crosstrek. It’s hard to convince buyers to spend the extra money, when the standard Crosstrek got 30/34 city/highway mpg. If gas prices shoot up, hybrid sales will increase.

Subaru Corporation is developing new hybrid drivetrains as a favored way to meet increasingly stringent emission standards. Yoshinaga said last year, “Subaru is working to comply with California's zero-emission vehicle standards taking effect in 2018.” They will need to bring more hybrid models to the U.S. market and the new-generation Crosstrek will be the first to get it.

Look for Subaru to introduce the new 2018 Crosstrek plug-in hybrid for North America later this year. It’s been reported, the new Subaru PHEV will be based on Toyota’s hybrid technology. After this, the new global platform will allow all their vehicles to be fitted with hybrid powertrains, plug-in hybrids, electric units, and other types of alternative power units. The all-new Subaru Ascent 3-Row SUV could be next. Will consumers buy it? Stay tuned.

Reader Poll: Why would you buy a hybrid vehicle?

Gary Johnston wrote on July 31, 2017 - 9:56am Permalink
Why plug in....very inconvenient. Why not Honda style where it recharges while driving on gas? I would not buy a plug in.....and I have 3 Subarus!!
Denis Flierl wrote on July 31, 2017 - 6:13pm Permalink
We aren't sure what powertrain Subaru will use for sure in their future vehicles. Just that they are exploring many options. Thanks for reading Gary!
Jayson wrote on August 4, 2017 - 3:43pm Permalink
Subaru has neither announced a hybrid, or plug-in option for any of their cars - why? Because it doesn't work with the Subaru Symmetrical AWD system. Subaru already meets California's strict Partial Zero emissions requirements, but with the stricter Federal EPA regulations may be the only remaining concern. With that said, please review your facts.
Denis Flierl wrote on August 4, 2017 - 5:32pm Permalink
They have announced a hybrid Crosstrek. It's coming sooner than you think.
Jayson wrote on August 5, 2017 - 7:50pm Permalink
Everything is speculation. That is directly coming from Shaun, the Western Regional Manager for Subaru of America. They are investing in the R&D in this regards, but they have not officially announced it's release - only that it is "considering it". Even the press release states that it's in "development" stages, but nothing is set in stone as far as it's release, and nothing is guaranteed. Just like all theories towards the release of another hatchback WRX, the US release of the Levorg, or a Highlander based 7 passenger SUV were all false, please differentiate facts and rumors.
Denis Flierl wrote on August 6, 2017 - 8:37am Permalink
Of course Subaru is never going to officially verify anything. It's what all automakers do in regards to future models. Thanks for reading!
PulSe wrote on August 10, 2017 - 3:48pm Permalink
"it doesn't work" is a pretty broad statement. So broad as to be discounted.
Billy wrote on August 1, 2017 - 8:46pm Permalink
Subaru ascent hybrid. will be good get pretty good mpg i think me and my wife has a ford fusion hybrid it pretty good Subaru putting in a new hybrid system in their vehicles that's good to see Subaru has saftey vehicles i been reading a lot about Subaru boxer engines and their eyesight technology and their. new Global platform looks. to be saftey
David Jones wrote on August 2, 2017 - 2:05pm Permalink
IMHO the Ascent will feature a small GDI turbo boxer (either existing or new). A hybrid may be available later but they will not release just a hybrid version, that would be very unpopular.
Jayson wrote on August 4, 2017 - 3:41pm Permalink
First, I work for Subaru, and they have no intentions of making a Hybrid anything because the typical hybrid system found in other manufacturers, defeats the purpose of SYMMETRICAL AWD. This article is obviously click bait because the author has no idea what he's talkinga bout. I'm looking at allocation for the next 6 months for the Crosstrek, and what do you know - NO HYBRID'S as an available option. Now, Subaru Japan has announced they may consider an electric variation to meet EPA regulations, but they do not anticipate it selling very well as traditional Subaru buyers are outdoorsy, weekend warrior types who don't fall for the same crap that Hybrid's save you money (google the results, it takes on average 15 years for a Hybrid to return on investment before you start "saving").
Denis Flierl wrote on August 4, 2017 - 5:29pm Permalink
Sorry Jayson, Jeff Walters, executive vice president of sales, Subaru of America, Inc. has confirmed a Crosstrek hybrid. Here's his exact quote when they dropped the Crosstrek hybrid last year. “It’s important to note that we are not leaving the hybrid market permanently. We are currently working on a new hybrid vehicle, although it is too early to discuss specifics.” You did know Subaru produced a Crosstrek hybrid, right? They aren't going to tell a low-level employee about any future model release plans. Have a nice weekend, go back to work on Monday and don't worry about it. Thanks for reading.
MozzieFantastic wrote on August 7, 2017 - 7:06pm Permalink
They aren't releasing a 2018 Crosstrek hybrid. Those Crosstreks are already out.
Greg Platupe wrote on August 21, 2017 - 11:51am Permalink
I've been waiting for the ascent to come out. If it doesn't happen sooner then later, I might just have to jump ship and grab the new vw. As for the hybrid , if it was affordable and had significantly better mileage then it would be worth looking in to it . 3mph is with it
Denis Flierl wrote on August 22, 2017 - 6:20am Permalink
The Ascent 3-Row is scheduled to launch in 2018 Greg. Thanks for reading!