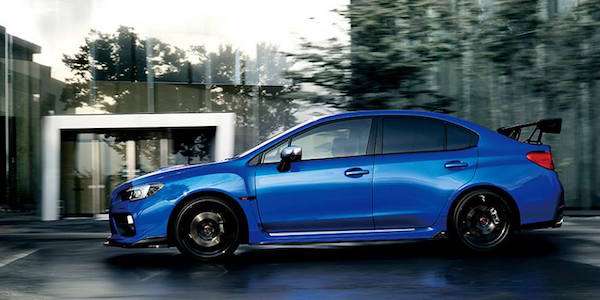 What’s up with Subaru only offering a CVT automatic in their new limited edition 2017 WRX S4 tS? When Subaru Tecnica International (STI) announced another new Japan-only WRX limited edition model, they said it will only get the WRX Sport Lineartronic CVT automatic. Why doesn't it get the 6-speed manual?

Unfortunately, performance enthusiasts in Japan only get one choice of transmission in the 2017 Subaru WRX S4 tS (tuned by STI). STI enhanced the handling, power and performance of the new WRX S4 tS, and it also gets an available NBR Challenge Package. The WRX’s 6-speed gearbox is one of it’s best mechanical attributes. Why is Subaru pushing the WRX’s Sport Lineartronic in the special models?

It’s all about safety

Subaru is all about safety and the two new WRX S4 tS models also feature their latest advanced safety features such as the EyeSight driver assist technology. It’s one of Subaru’s core values and they are pushing it hard, even on their performance sedan, WRX.

The reason why Subaru doesn't offer a 6-speed manual gearbox on the Limited Edition models, is because EyeSight doesn’t work with a manual. The full EyeSight driver assist technology will only work with an automatic transmission. The system’s pre-collision braking control works to help drivers avoid or limit frontal impact by detecting other vehicles, pedestrians and cyclists, slowing or stopping the car when necessary. It also uses an adaptive cruise control function, maintaining a set distance behind the vehicle in front, and also controls braking if the preceding vehicle stops quickly. It needs the automatic transmission to do both.

The safety factor is also why you won’t see the new 2017 Subaru Impreza offered with a manual rower in the US and Australia. EyeSight is now standard on the new Impreza compact. Subaru wants to be the leader in safety and it comes with a price. You won’t see the manual offered on many models in the future.

What’s the future hold for the manual?

Subaru is continuing to roll out their newest models with more safety features than ever. The trend will continue and you’ll see EyeSight become a standard feature on many models. What does it mean for performance enthusiasts around the globe? Subaru will still put a manual gearbox in the WRX. The WRX STI for now, only comes with a 6-speed gearbox. Subaru won’t drop the manual rower on their performance sedans. Unfortunately, performance enthusiasts in Japan only get one choice of transmission in the Limited Edition 2017 Subaru WRX S4 tS.