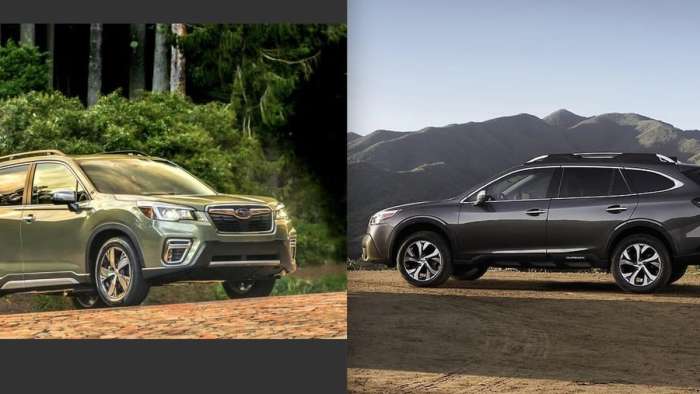 How loyal are customers who are buying the 2021 Subaru Forester and 2022 Outback? Until now, Subaru enjoyed a very high customer loyalty rate. See why that could change.
Advertisement

A high percentage of 2021 Subaru Forester and 2022 Outback customers are return customers trading in a Subaru vehicle. Auto brand analysis reveals Subaru customer loyalty rates have been the highest among all mainstream car brands, but that could change. With the inventory shortages and lack of new Forester and Outback models to sell, some customers could defect.

A recent study from IHS Markit revealed Subaru of America had the third most loyal customers of all mainstream car brands. In quarter one in 2021, the top five leaders in brand loyalty are Ford, Toyota, Subaru, Chevrolet, and Honda. 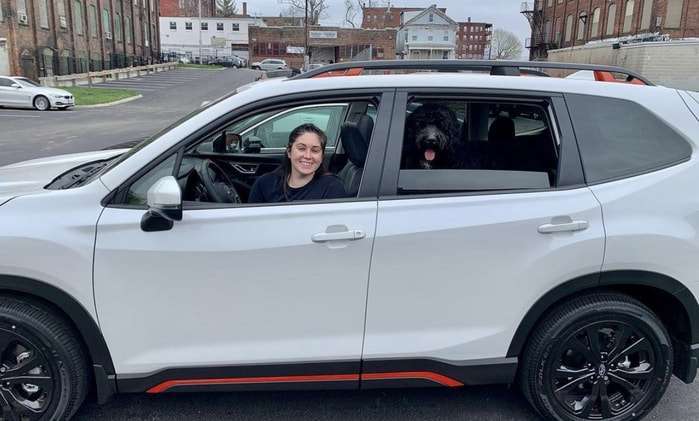 But things have changed in quarter two. According to further analysis from IHS Markit, brand loyalty among U.S. consumers for new vehicles dropped to a six-year low in June. Research of new vehicle registration data through June indicates that the overall brand loyalty rate of 51 percent in the U.S. market is the lowest since August 2015 due to low inventory levels.

A recent survey by Naked Lime, a marketing company owned by Reynolds and Reynolds, found Subaru now has the fourth-best customer loyalty rate among mainstream brands at 48.5 percent. That is down from IHS Markit's number three ranking earlier in the year that showed they were retaining 59 percent of its owners. Analysts say inventory shortages have hurt Subaru. 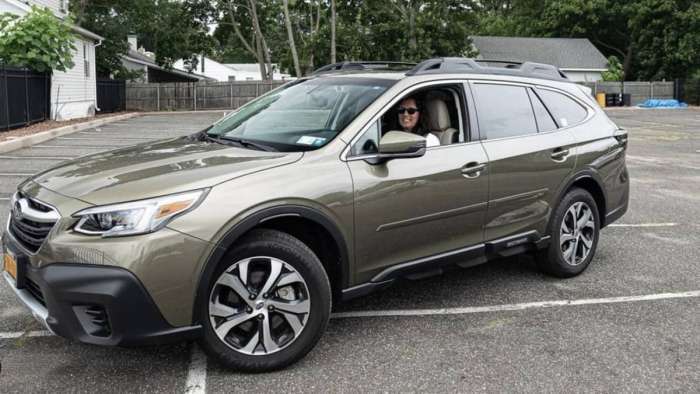 Tom Libby, associate director of loyalty and industry analysis at IHS Markit, says, "Obviously a major risk is that due to lack of inventory, a brand's existing owners now are more likely to defect to another brand than they have been in quite a while."

Subaru has the lowest inventory of any automaker at six days at the end of July. 2021 Subaru Forester, Crosstrek, and Outback models have been struck with the global microchip shortage. Some Subaru shoppers may have to defect to another car brand. Subaru is not alone.

The Naked Lime survey says Toyota has the highest retention rate at 60.2 percent, followed by Honda (51.2 percent), Ram (50.4 percent), Subaru (48.5 percent), and Ford (45.9 percent) to round out the top five mainstream automakers.

IHS Markit analysis indicates year-over-year, new vehicle brand loyalty in the U.S. fell by 1.7 percentage points to 51 percent in June (vs. June 2020). This follows a 2.5 percentage drop year-over-year in May and a 2.8 percent decline in April. The aggregated three-month brand loyalty in 2021 was 51.6 percent, down from 54 percent a year ago and 54.1 percent two years ago.

Subaru is not alone as buyers defect to other brands. Now, the Camden, N.J. automaker is more susceptible to customer defection due to its low inventory levels of 2021 Subaru Forester and 2022 Subaru Outback models.

You Might Also Like: The Subaru Outback and Forester Are Now The #5 and #8 Most-Shopped Cars In America

Tom wrote on August 28, 2021 - 8:35am Permalink
I like my new Outback except: slowness of touchscreen. the touchscreen itself. autostop/start. greetings & goodbyes. and the transmission, which is always in too high a gear. i swear it goes from 1st to 4th and then to 5th and you're just getting underway.
Jeff wrote on August 29, 2021 - 9:26pm Permalink
Bought a Legacy Touring XT thisd summer. I don't like that touch screen at all. My ten year old iPad is quicker to respond. Plus the safety features are obnoxious. I fun the constantly beeping lane keep assist off. I also turn off the driver management off, but it keeps re-enabling itself. I like the car, but that screen is a p.i.t.a..
Lh wrote on August 28, 2021 - 11:46pm Permalink
Just got rid if my 2013 Outback and couldn’t be happier. The transmission was a nightmare; new headgasket ar 60k. Loving my Highlander.
Donna L. wrote on September 1, 2021 - 8:02am Permalink
Subaru is fully aware of transmission issues according to a Forbes article. We wrote to the spokesperson Dominick Infante @DominickInfante referencing the CVT warranty being extended because Subaru wasn’t comfortable with the level of unhappiness. He wouldn’t respond. The customers over their 100,000 mile cutoff are left at a loss.
Chris wrote on August 29, 2021 - 8:29am Permalink
I was a life long Honda owner since 1992 until Honda did the cost cutting thing which made their vehicles unreliable. I bought a Subaru Forester and Impreza. Had the Impreza 5 years and got rid of it. Premature window cracks, three to be exact and road noise like you've never heard before. Of course the dealer here in Canada wont acknowledge that there is a window recall in the States. "Sir, we are unaware of any such recall". dealers are dishonest scumbags. My 2015 Forester had the AC compressor fail, premature rusting, the brake switch issue, which I fixed myself with contact cleaner, rear wiper seized, which I fixed myself, uneven tire wear, windows that chatter when opening. Rear hatch prop rod broke cracking the rear tail light. I bought a new 2020 Toyota Highlander to replace the Impreza. I hoping to replace the Forester in 5 years with another Toyota product. The thing that makes me scratch my head is that consumer reports rates the Forester as their top pic...now I don't subscribe to CR anymore.
CHRISTINE RYAN wrote on August 29, 2021 - 10:17am Permalink
I believe once more Subaru owners have or hear about the growing incidence of UNINTENDED ACCELERATION and UNINTENDED BREAKING that has totalled cars, injured people or just scared the drivers to death (Which Subaru refuses to admit. In my case after having my 2019 race full speed into a gate. While my foot was on the break! The Outback in the shop for more than 6 weeks. And then SOA sends a short email stating the car is just fine!!!!). or people start to die or kill a child in a crosswalk. Then Subaru will certainly lose its client base. Toyota paid out huge sums - over 1 billion (I believe) for similar issues a few years ago. These cars with the futuristic "safety features" are not safe! And Subaru just asks if my floor mat could have been the issue!!!! Be careful!!!
Ashley wrote on August 29, 2021 - 10:33am Permalink
The reason Subaru is losing loyal costumers is because they are not living up to their brand image. Toyota eco drive and hybrid options are too good to pass up for the environmentally conscious. I love Subaru, but I cannot conscientiously buy a suv that doesn’t have some attention paid to the carbon footprint, a value Subaru has touted for years, yet their image is changing to be more truck-like off road. They will lose gen x and younger consumers because of this.
Dean wrote on August 29, 2021 - 11:06am Permalink
How many times can one article say low inventory is causing loyalty problems?
Javk wrote on August 29, 2021 - 11:28am Permalink
No it's then not carrying about quality and leaving customers high and dry. Eyesight, thin windshields, electronics that don't work, the list goes on. But hey, they have no problems, everything is normal.
Jane Gundlach wrote on August 29, 2021 - 12:54pm Permalink
Yes, I wanted to trade in my old Forester for a new Forester. That was July. To obtain a new Forester, not a '22 but this past year's 21, iI had to order it and am not slated to receive it until more than 2 months after my order. The 22's are delayed even more,, probably early winter, so that was an even more distant option. If I had not been able or willing to wait, I would have had to buy something else. No surprise many people will have to.
Donna Larcy wrote on August 29, 2021 - 9:50pm Permalink
We need truthful information about the transmission issues. Cutting off the extended warranty at 100,000 miles is excluding all the customers having transmission failure a few miles over. Customer service only pays for parts if your car breakdown away from the dealerships does not cover local mechanical work. We have experienced this with our Forestor. Learn more before purchasing.
Steve Nedlaw wrote on August 30, 2021 - 1:40pm Permalink
We have been subaru staunch fans with multiple vehicles for the longest time. No longer. The 2021outback xt turbo is no match for the 6 cyl 2019. We own both. Even if we were to forgive that, the 'nanny' attitude of increasing the volume and shrill of the seat belt warning to a degree where rudely upsetting, is unforgiving to North Americans. Warn us politely.. Don't force your customers. Learn from Ford's, Lincoln. We are done with subaru after 25 years.
Jerod Lammi wrote on September 1, 2021 - 7:47am Permalink
I've had at least one Subaru at all times for the past 27 years. I'll probably never buy a 4 cylinder, so when my 200,000 mile 3.6R kicks the bucket (it still runs great, and I've run it hard the whole time (keeping up with regular maintenance is all I've done)) I'll probably switch to Toyota or possibly Tesla. Subaru has been going the wrong way in my opinion. Getting rid of the most amazing 3.6 is unforgivable.

Tsingshan's Threat to Tesla: EV Maker Is In Battery Crosshairs
Tesla-Funded Research Reveals One of The Biggest Mysteries of EV Battery
END_OF_DOCUMENT_TOKEN_TO_BE_REPLACED