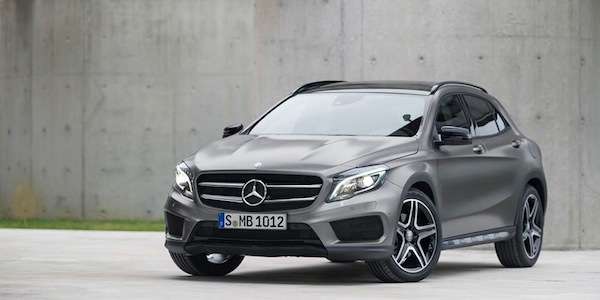 The all-new 2015 Mercedes-Benz GLA-Class just made its dealer launch in Europe and its already attracting new buyers. How is Mercedes doing it?
Advertisement

If you have been watching the Mercedes-Benz brand you know they are doing a lot of things right. The all-new CLA-Class the German automaker launched last year, is selling above company expectations. And now the 2015 GLA-Class is following in the same footsteps and looks to be another winner for the Stuttgart automaker. What is Mercedes doing to win all these new customers who have never purchased a Mercedes-Benz product before?

Growing fast in the compact market

Mercedes has seen growth in all regions and strong growth rates with E- and S-Class, and have seen a successful start of C-Class and new 2015 GLA-Class in Europe. And the new compact luxury SUV hasn’t even been launched in the U.S. market yet.

Ola Källenius, Member of the Divisional Board Mercedes-Benz Cars responsible for Marketing & Sales said, “We have been posting double-digit growth rates for sales in every month since the beginning of the year. We expect added impetus from the new C-Class and the compact SUV GLA, which have been taking over the roads of Europe in the last few weeks.”

Mercedes using the social web better than anyone

What’s the biggest reason the German automaker is seeing so much success, besides giving young consumers smart new offerings? Mercedes is the most popular and successful automobile brand on the social web. If you want to win a new generation of customers to your brand, you reach them where they connect with their family and friends. Mercedes uses social media better than anyone else in the auto industry.

On Facebook alone, the Stuttgart-based premium brand has gained the most fans amongst all automobile brands, with more than 3.2 million new users last year alone. According to recent figures published by socialbakers, Mercedes-Benz users were the most active automobile fans in this social network with 22 million interactions.

If you look at how Mercedes compares with global non-automobile brands, the Stuttgart automaker is in 2nd place with respect to interaction with its Facebook fans. Only fans of Walt Disney had more Likes, Shares and Comments. eBench shows similar results for Mercedes. They show that on Facebook, YouTube and Twitter, Mercedes-Benz “shows the largest growth, the greatest interaction and the most positive assessments among premium car manufacturers.”

Mercedes has seen their interactions on Facebook increase to three million per month in 2014. And for Instagram, the figure is even higher with 4.5 million customer interactions. Mercedes is expanding its presence on the social web and connecting with a new generation of buyers. And this new millennial generation is responding in a big way.

Why will Mercedes-Benz be the number one luxury brand in the world by 2015? Besides knowing how to build cars, they know how to connect with a new generation of buyers using social media. And they are building great new cars like the 2014 CLA-Class and the all-new 2015 Mercedes-Benz GLA-Class compact luxury SUV.