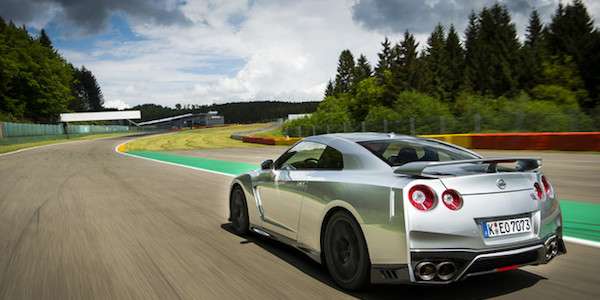 How quick is the New 2017 Nissan GT-R? Nissan won’t reveal the numbers.
Advertisement

The new 2017 Nissan GT-R gets significant performance upgrades with an addition 20hp over the outgoing model. But Nissan won’t reveal the new GT-R’s 0-60 sprint times. Why not?

Why would Nissan do this when the GT-R is their flagship performance model. You would think they would shout these numbers from the rooftops. Why else do you build a supercar? The GT-R has always based its credentials on its performance and lap times.

The only thing Nissan has revealed are the engine performance numbers. The new 2017 model gets a long list of enhanced equipment that includes standard Titanium exhaust system, Active Sound Enhancement, refined interior and more horsepower under the hood. The new 2017 GT-R’s 3.8-liter V6 produces 565 horsepower, an increase of 20 horsepower over the 2016 model. Nissan says the flatter torque curve “enhances on-demand acceleration.”

Nissan has declined to offer any official 0-60 mph sprint times for its newly-upgraded 2017 model. It has to be quicker than the previous GT-R’s 2.7-second 0-62 mph. But they did offer a rebuttal to the Autocar report.

However according to Motor, Nissan Australia’s general manager of corporate communications Peter Fadeyev has rejected this claim. He says, “We’ve heard nothing to that effect, and we work directly with global GT-R chief Hiroshi Tamura. That doesn’t match anything we’ve aware of, in either our marketing or communications materials/conversations.”

The 2017 Nissan GT-R is an insane machine capable of incredible sprint times. With all-wheel-drive, it launches quicker than most other supercars. It’s what sets this Godzilla apart.

Elon Musk Says Tesla To Offer Car Insurance in Texas Next Month, But These Challenges Exist
Tesla Co-Found Plans To Build a Battery Factory and Shift The Industry
END_OF_DOCUMENT_TOKEN_TO_BE_REPLACED