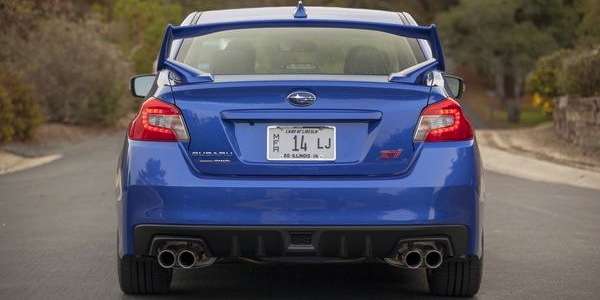 Subaru announced all-time record sales for WRX STI. Why is it the hottest selling car in the lineup?
Advertisement

The 2015 Subaru WRX STI is about to make its dealer launch, but the 2014 WRX STI is the hottest car in Subaru's lineup. Subaru sold more of the previous-generation performance cars in April as a percentage than any other car in their lineup. Subaru announced the best-ever April sales month in company history and the outgoing WRX STI helped those sales numbers significantly.

The new-generation 2015 Subaru WRX STI is about to arrive in dealer showrooms but the 2014 model has close to an 80 percent increase in sales over the previous year’s month to date sales. YTD, the WRX STI is just behind the Forester and XV Crosstrek with a 36.3 percent increase over last years sales. So why are so many buyers snatching up the 2014 performance models?

There are likely two reasons. Performance fans aren’t sure about the 2015 WRX STI yet, and don’t know if they like the new styling changes. Many loyal WRX STI fans were disappointed and like the previous generation styling. Because there weren’t any power upgrades for 2015, there isn’t a huge incentive to wait for the new WRX STI’s. We know it’s not about price, because the 2015 WRX STI holds the base price of $34,495.

But maybe the biggest reason for the hot sales, is that the new 2015 WRX STI arrives in the sedan body style only and isn’t being offered in a 5-door hatchback body style. 50 percent of WRX STI sales were the 5-doors and buyers are looking to get the last of the hatch models before they disappear. There has been a strong backlash here in the U.S. and other global markets from WRX/STI fans who want a hatchback in the performance models. STI fans like the utility and versatility that the hatchback offers.

But Subaru is listening and we’ll likely see the 5-door back in the WRX STI lineup after Subaru expands their production capacity in their Indiana plant. Subaru is investing $230 million into their U.S. plant and will increase production by 30 percent. Subaru can’t keep up with production and has been seeing record sales every month. They will now build the new Impreza here in the U.S. and it will free up production space in Japan for a new-gen WRX STI hatchback.

So for now, WRX STI fans are snatching up the last 5-door models. For hatch buyers, it’s all about the versatility and utility that the hatchback offers. Performance fans use their cars for everything and they love the extra functionality that the hatch offers. In addition to offering performance, it offers buyers to use the WRX/STI for multi-purposes. It can be used for recreational activities like transporting mountain bikes, snowboards, and surfboards for use on the weekends.

But Subaru does listen to their loyal customers and will respond if you send a clear message that you want a new-generation WRX/STI 5-door hatch. You can send your response to John Mergen, Subaru of America, Inc. at the Customer/Dealer Services Department. You can call 1-800-SUBARU3 (1-800-782-2783) or email at [email protected]