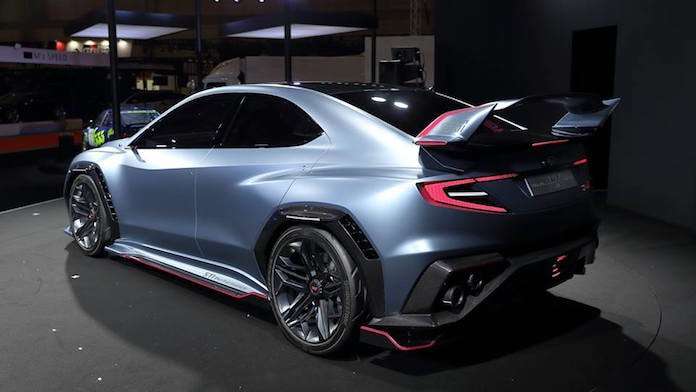 Will Subaru actually bring the next-generation 2020 WRX STI to production that looks anything like the concept revealed at the Tokyo Auto Salon?
Advertisement

Just like the last-generation concept 2015 WRX design, it left most performance fans disappointed, so the new-generation 2020 WRX STI likely won’t see radical design changes like the concept car they unveiled at the Tokyo Auto Salon 2018. Subaru is still a conservative automaker and happy with the niche performance car market they’ve carved out for themselves. Last year, Subaru of America sold 31,358 WRX/STI sedans (about 60 percent of their global market) and that’s about all the Subaru Corporation can build at their Gunma, Japan factory.

Subaru announced they sold nearly 500,000 Forester, Outback and Crosstrek all-wheel-drive vehicles last year in the U.S. and that’s their bread and butter. Subaru knows they have a loyal fan base of performance enthusiasts, but their main emphasis is still on building Crossovers, SUVs and now big family vehicles like the 2019 Ascent 3-Row.

There is an estimated 80 million millennials in the U.S. alone and Michael McHale, Director, of Subaru Corporate Communications estimates 6 million of those fit Subaru’s target demographic to buy their multi-purposed vehicles like the all-new 2018 Crosstrek. “So, why, would the company need to shift its focus away from them?” He asks.

So we shouldn’t expect Subaru to look much farther beyond the niche it’s historically cultivated. It’s going to stay with its core values that has proven to be successful for the brand with the well-known symmetrical all-wheel-drive setup, boxer engine, and generally conservative styling and design language.

Tomohiko Ikeda, former president and CEO of Subaru of America and current chief of global marketing, said recently, Subaru “strives to set itself apart as best it can with the resources it has, not join the fray near the top of the automotive leader board.”

All auto manufacturers bring wild-looking concepts to the shows to get media attention, but the actual production cars usually end up looking very different. So don’t be too disappointed if the fifth-generation 2020 Subaru WRX STI doesn’t look like the concept car Subaru brought to Tokyo Auto Salon 2018.

Dana wrote on January 21, 2018 - 8:05am Permalink
Take a 2018 impreza sport.. add fender flares, a hood scoop, a spoiler..voila.. 2020 WRX. Id be fine with that if the hatch came back.
Denis Flierl wrote on January 25, 2018 - 10:22am Permalink
Hopefully Subaru listens Dana. Thanks for reading!
Sean Y. wrote on January 29, 2018 - 7:20pm Permalink
When might we see the actual production model? Can't remember how long between concept and production for the MY15.
David Martínez wrote on May 13, 2018 - 5:45pm Permalink
Well, as a 16 STI owner I would say that if that’s Subaru thinking then I’m getting a different brand next time, there’s no point to stay with a company that disregards its fans wishes by keeping an almost obsolete platform, nowadays the STI is falling behind and it will continue to do so if there’s no improvements