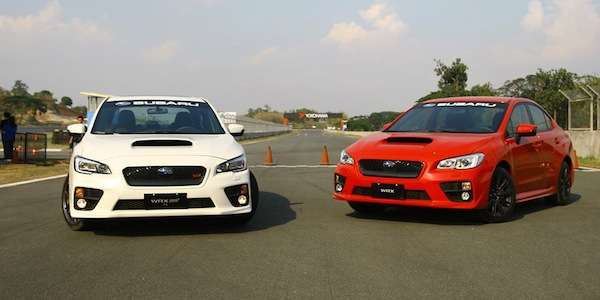 Why 2015 Subaru WRX STI will be wildly popular in Russia

The all-new 2015 Subaru WRX and WRX STI make their launch in Russia. Why will the performance cars be wildly popular in Russia?
Advertisement

The new-generation 2015 Subaru WRX and WRX STI are the best performing performance cars on the planet in one key area. These cars are making their dealer launch in Russia this week and they will be wildly popular in the land up north for one very specific reason. These cars are build for this kind of climate. We all know Subaru is known for the Symmetrical all-wheel-drive systems, but this is what Subaru does best. And they do it better in their performance cars too.

What sets the 2015 Subaru WRX and WRX STI apart from the competition? Subaru actually uses four different all-wheel-drive systems on their vehicles. It’s not a one system fits all approach. The 2015 WRX gets a different system than the STI. Why doesn’t Subaru just use the same Symmetrical all-wheel drive for all their models? The performance WRX and WRX STI need something special to handle the different power outputs. These cars are designed for a different purpose than the Forester, Outback and XV Crosstrek.

What sets these performance cars apart?

In addition to its Symmetrical All-Wheel Drive, 2015 WRX also uses Vehicle Dynamics Control (VDC) to Augment its AWD capability. The VDC system uses sensors “to compare where the vehicle is heading to where the driver is steering it.” The system will take corrective action to keep the vehicle on course if needed, and can apply brake pressure automatically and reduce torque to the wheels that need it. The rear-drive BRZ is the only model in the lineup that doesn’t have it.

But the new 2015 WRX STI uses a very special AWD hardware. STI of course gets more hp and needs a special system. WRX STI is a Rally-bred car that has its roots deep in Rally racing. The car was first developed and perfected on the race course and then built as a production model for performance enthusiasts around the globe. 2015 WRX STI uses a limited-slip, planetary gear-type center differential, augmented by an electronically controlled center limited-slip differential. This provides for a performance-oriented 41:59 torque split. This allows the mechanically limited slip differential to have a quicker response and activates just prior to the electronic limited-slip differential.

The 2015 WRX STI DCCD AWD System has three automatic modes: “Auto” provides optimal performance for all conditions. The “Auto” (-) Active Sport setting shifts the torque bias to the rear and also opens the center limited-slip differential (no locking factor), which improves steering feel for performance driving on the track.

Because the WRX STI is often taken to the track and used in performance driving situations, in any of the system’s three automatic modes, the electronically managed continuously variable transfer clutch can vary the distribution ratio through the center differential as needed to suit driving and road-surface conditions.

Built for the Russian climate

Some Russian STI owners will take their cars to the track where there are varying surfaces. But they will be subjected to slick surfaces like snow or ice in the Russian climate where extra traction is needed. Subaru designed the WRX STI with the Auto (+) setting to tighten the LSD. Manual mode offers six selectable settings, allowing the driver to vary the front-to-rear torque distribution to optimize All-Wheel Drive performance to suit specific driving conditions.

The all-new 2015 Subaru WRX and WRX STI are launching in cold Russia this week. These two performance cars will be wildly popular in Russia because they are build for this climate. Subaru perfected the special STI DCCD AWD system in actual rally racing situations and it transfers directly to the production model STI. The WRX and STI has a huge following in Russia. The new 2015 models will sell like crazy.