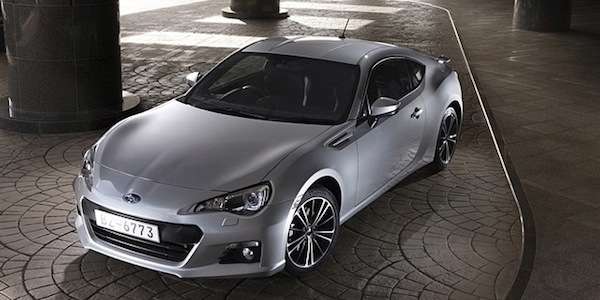 The 2014 Subaru BRZ has been honored as one of Automobile Magazine’s 2014 All-Stars for the second year in a row.
Advertisement

The 2014 Subaru BRZ is a great player and an All-Star in the field of two-door sports cars. Subaru announced that Automobile Magazine has named the Subaru BRZ to its prestigious All-Star list for 2014. BRZ won the award last year and the rear-wheel-drive sports car repeats again for 2014. The Subaru BRZ shares the honors with its twin coupe cousin the Scion FR-S. Both cars were built in a joint venture between Subaru and Toyota. Subaru builds the Subaru BRZ, Scion FR-S and Toyota GT 86 two-door coupes in their Subaru Gunma factory in Japan.

The BRZ is an All-Star player and was judged by Automobile Magazine against every new car currently on sale in the United States. The 2014 Subaru BRZ is in an elite class of all-stars and was one of just 10 cars selected to the All Star list. This being the second year in a row is quite an accomplishment for the rear-drive sports car. What makes the BRZ so special?

Automobile Magazine praised BRZ for its driving dynamics that make it a true driver’s car. Jean Jennings, editor-in-chief of Automobile Magazine said, "The Subaru BRZ is among the few modern cars you can enjoy driving at the limit without losing your license. It's a hoot to drive. It has a perfectly balanced, rear-wheel-drive chassis and perfectly placed controls. On top of all that, it doesn't cost a fortune to buy or operate. No wonder it's an Automobile Magazine All-Star for the second year in a row."

Anyone who has driven the BRZ on a closed circuit can testify to it’s amazing balance and low center of gravity in the corners. This writer had the chance to drive the 2013 BRZ at High Plains Raceway east of Denver, Colorado. The BRZ with its Boxer engine tucked low and back in the chassis keeps the car from leaning in tight corners. The low center of gravity along with it’s rear-drive makes BRZ a good performer regardless of it’s horsepower.

BRZ’s owners also know that the sports car is fun to drive on the open road as well. Automobile’s editors were convinced of its all-star status by the coupe’s performance both on a closed course and on the open road. The magazine took the BRZ on a “great American road trip” from Michigan to New Orleans after they selected Subaru’s coupe as one of its All-Stars.

After the road trip, Automobile Magazine was thoroughly impressed. “Is 200 hp enough for a sports car? Yes, provided that sports car is light and has a perfectly balanced, rear-wheel-drive chassis. Oh, and don’t forget to include perfectly placed controls and communicative steering. Because of all this, the virtually identical Scion FR-S and Subaru BRZ offer a pure driving experience for a new generation of enthusiasts and are among the few modern cars you can enjoy driving at the limit without losing your license. They also look great and are priced for the common man or woman.”

The 2014 Subaru BRZ has a stating priced at $25,595 and is a great value for a two-door sports car. BRZ received another award recently from ALG and the 2014 BRZ holds its value better than any other sports car. And for the 2014 model, BRZ received some high-tech upgrades.

Subaru should be proud that the 2014 BRZ has been selected by the editors of Automobile as an All-Star for the second year in a row. “This rousing endorsement from Automobile is a testament to the BRZ’s performance both on a race track and on everyday roads.” Now BRZ fans are waiting for STI to get their hands on the rear-drive two-door sports car.

Other 2014 Subaru BRZ Stories of interest.