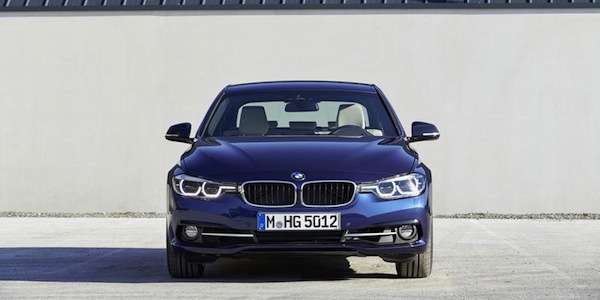 BMW has come out with the new 2016 3 Series 318i in Europe. Would the 3 cylinder ever catch on in the U.S.?
Advertisement

The 2016 BMW 3 Series is the most popular car in the Bavarian automaker’s lineup and they haven’t done much wrong with the 3 Series. They have eleven powerplants for consumers to choose from for 2016, and the new 340i gets a new 3.0-liter turbocharged inline-six engine which has been the big news. The BMW 3 Series has fuel efficient diesel engines, a new 330e Sedan plug-in hybrid and a new engine with only 3 cylinders.

Yes, BMW has put a new 3-cylinder gasoline engine in the new 2016 3 Series. It will only be sold in Europe where the new model will likely catch on due to it’s fuel stingy ratings. BMW says it will get up to 51.4 mpg on the European cycle which is outstanding. Even with those numbers, it wouldn’t catch on here in the U.S. where we like power first and efficiency second in our luxury performance cars.

In the BMW 318i, the German automaker uses the same 1.5-liter turbocharged three-cylinder gasoline engine that powers the BMW i8 performance sports car. It doesn’t have the extra advantage of the electric motor like the i8 that delivers even more power, but Auto Express found out the new 318i is high on the fun-to-drive meter. The little three-banger pumps out 134 hp and 162 lb-ft of torque, which isn’t too bad considering the fuel mileage specs.

Where the 318i has an advantage, is in the weight savings over the front axle which makes this 3 Series a good performer in the corners which is what Europeans want for their twisty roads. Less weight translates to improved driving dynamics and handling characteristics in the corners.

While the new 2016 BMW 318i will likely sell well in Europe, it would never sell here in the U.S. market. Americans like the new 2016 340i with the new 320hp TwinPower turbo powerplant. BMW knows that every global market is different and they won’t try to make a variant fit where it shouldn’t.