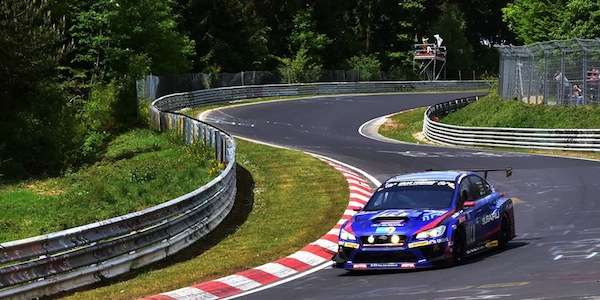 The 2015 Subaru WRX STI won the 2015 Nurburgring 24 hour race in convincing fashion. Check out the fastest lap video in the SPT3 class.
Advertisement

Subaru Technica International (STI) knew they had a fast car when they started the grueling Nurburgring 24 hour race, and they won the race four weeks ago in convincing fashion.

The fastest lap at the 2015 Nurburgring 24 hour race in the SPT3 class was accomplished by the winning 2015 Subaru WRX STI. Subaru Tecnica International (STI) driver Carlo Van Dam was the driver who pulled off this super fast lap of was 9:08:037. Watch the video and see it from behind the wheel.

With 5 hours to go in the grueling race, Carlo van Dam tweeted out on Twitter, “5hrs to go! with 8 laps in front, P20 overall.” After his last stint behind the wheel of the new 2015 STI, he tweeted, "The fact that a sedan like the WRX STI can chase after GT3 machines is amazing and so much fun!"

Other drivers who contributed to the Nurburgring victory were Tim Schrick (Germany) who was at the wheel for the Subaru Tecnica International team for the first time. Marcel Lasee (Germany), and Kota Sasaki (Japan) were also starting in the 2015 Subaru STI.

As night fell, 55 laps later, the STI was in 25th overall and still held the number one position in the SP3T class. Night racing can look spectacular from a spectators view, but up close it can be extremely dangerous. A number of incidents involving contact between other cars forced some teams...read more.

The new 2015 Subaru WRX STI NBR received a number of enhancements and many included body changes that made the STI sedan more aerodynamic. This could have contributed to the fastest lap time because the car was slippier through the air. These factors helped Subaru win at the Nurburgring 24-hour race in May.

Subaru’s WRX STI finished in first place 37 minutes and 11 laps ahead of the second place Lexus RC. They were followed by the Audi TT RS, Audi TT RS 2.0, Seat Leon Supercopa and Ford Focus. The STI team gets an impressive victory at the 2015 Nurburgring 24 hr race with the 2015 Subaru WRX STI NBR race car. They also had the fastest lap in the SPT3 class.