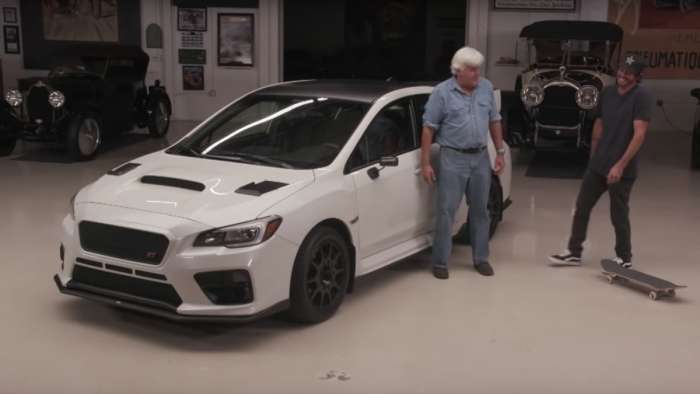 Bucky Lasek has never owned an American muscle car, but he does love his Subaru WRX STI. Lasek was one of the world’s top skateboarders and has been at the top of his game. The talented skater has won 12 X Games medals, six of which were gold, and has been featured on the cover of ESPN the Magazine, featured in Rolling Stone and appeared on The Today Show. Now he appears on Jay Leno’s Garage for the first time. We aren’t sure if Leno will ever ask him back.

Lasek, a Subaru Rallycross driver, brings his COBB-tuned 2016 Subaru WRX STI and leaves his mark on Jay Leno’s garage. Lasek says he built the modified STI as a “rally-inspired WRX STI streetcar.” It comes with 400 horsepower to the rear wheels, has lots of carbon fiber to lighten the weight, and skid plates underneath to protect the special oil pan with baffles.

The funniest part of the Jay Leno video happens when Bucky Lasek makes his entrance by riding his skateboard into the garage and leaving a big skid mark on Leno’s garage floor. Leno is clearly pissed as Lasek laughs as he turns the corner and leaves a permanent mark on the shiny, clean painted floor.

Leno gets Lasek back by locking him out of the highly-modified Subaru WRX STI and leaves Lasek in the dust holding his board and has to chase his STI down. There are a few other surprises in the video but we won’t spoil the fun.