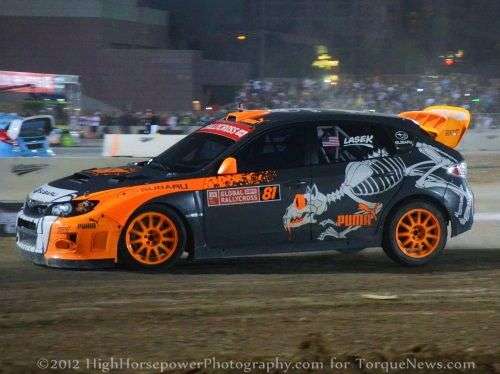 Rookie Global RallyCross driver Bucky Lasek has jumped from being one of the world’s top skateboaders to driving a WRX STI for the Subaru PUMA RallyCross Team.
Advertisement

Becoming one of the world’s top skateboarders is no easy feat, and in his years as a professional skateboarder, Bucky Lasek has been at the top of his game. The talented skater has won 12 X Games medals, six of which were gold, and has been featured on the cover of ESPN the Magazine, featured in Rolling Stone and appeared on The Today Show. What does a professional skater with this much success do after a successful skating career? He gets behind the wheel of a 550 horsepower Subaru WRX STI rallycross car.

Bucky Lasek began his four-wheel racing career on a shift cart at his local track, Moran Raceway and quickly showed he had the skills and talent to pursue racing. He began his professional racing career at Miller Raceway in Utah and perfected his driving skills at the Skip Barber Racing school. In 2009, Lasek began competeing in the MMRP Mustang Challenge Series and consistently placed in the top two in every race.

This year, Bucky Lasek took on another challenge to race in the 2012 Global RallyCross Championship Series. The Global RallyCross is one of the fastest growing race events in the country. And it’s much more exciting than watching cars turning left over and over. The Global Rallycross Championship provides an exciting combination of circuit racing, off-road racing and rally competition and features wheel-to-wheel racing. All the cars in the race are highly modified, high-performance production-based all-wheel-drive cars.

This year, Lasek joined the Subaru PUMA RallyCross Team and is one of three drivers to race for the team. The rookie driver has started his new rallycross career by reaching the Final for his second event in a row, and finished the season as seventh best overall. It looks like the talented skater will be a force to be reckoned with even more next season.

“I certainly don’t feel like a rookie anymore and it was nice to end the season with another trip to the Final,” explained Lasek. “I’m steadily getting more comfortable in the Subaru WRX STI, it’s all about seat time and learning the limits this year. This is an amazing opportunity that Subaru and PUMA have given me and as a new team with a new car we have all worked so hard this season.”

The Subaru WRX STI that Lasek and the other two Subaru PUMA RallyCross Team members drive pump out 550 horsepower and an impressive 750 lb ft of torque. The race cars have undergone extensive modifications beyond the engine. Changes include relocating the radiator and cooling system to the rear of the car. This is done to protect the radiator from flying debris and impacts typically found in wheel-to-wheel rallycross. The modified WRX STI makes extensive use of carbon fiber to reduce weight. The WRX STI race cars weights in under 2500 pounds which is 700 lbs lighter than a stock STI.

The Subaru team just finished the final race at the SEMA Show in Vegas and put on a thrilling show for spectators. It looks like Bucky Lasek has formed a bond with his new Subaru WRX STI race car. It’s much faster that his skateboard, but Lasek certainly has the talent and skills needed to compete in the Global RallyCross Championship. Look for even more good things from the Subaru PUMA RallyCross Team next season.

If you missed the race live or on ESPN, watch the exciting action on the videos below.

Elon Makes a Cybertruck Statement With an Action, But Quiet in Words
Tesla's Record Month in China: Doubled Registrations in March 2021
END_OF_DOCUMENT_TOKEN_TO_BE_REPLACED