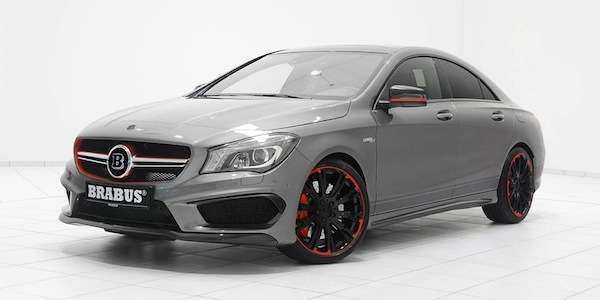 Want the fastest 2014 Mercedes-Benz CLA-Class in the world?

This 2014 Mercedes-Benz CLA-Class from Brabus is the fastest compact luxury CLA in the world. You can own one of these performance cars.
Advertisement

If you are wanting to own the fastest 2014 Mercedes-Benz CLA-Class on the planet, look no farther than this Brabus Mercedes-Benz CLA. Brabus is to AMG, what AMG is to Mercedes-Benz. They take every Mercedes-AMG high-performance car and make them even faster.

Brabus, who is the ultimate Mercedes tuner, has taken a 2014 Mercedes-Benz CLA45 AMG and given it their special treatment. They took the already exclusive CLA-Class from Mercedes and gave it even more power and performance. It’s called the Brabus CLA 45. Why did they do it? because they can.

Brabus is a high-end tuner from Germany that specializes in Mercedes-Benz and Mercedes-AMG vehicles turning them into supercars. They have been doing it since 1977 and have satisfied customers in over 106 countries with their special high-performance tuning. We can see why they have been so successful after seeing what they did to the 2014 Mercedes-Benz CLA45 AMG.

The new 2014 CLA45 AMG is already a true performance car and comes equipped with an AMG four-cylinder engine that pumps out 355 hp and 332 lb.-ft. of torque. This gives the new performance four-door coupe the world's most powerful four-cylinder engine built in series production. The powerful coupe sprints from 0-60 in 4.4 seconds with an electronically limited top speed of 155 mph.

But Brabus cranks it up even further with a special software upgrade for the CLA45, which boosts the 2.0-liter turbocharged four-cylinder engine’s output from 355 horsepower to 394. The extra power lowers the Brabus CLA45′s 0 to 60 mph time from 4.4 seconds to 4.2. That will excite even the most ardent performance fan.

Other Brabus treatments for the CLA-Class include red-banded black wheels that contrast nicely with the car’s silver exterior. They also include matching carbon fiber mirror caps to complete the look. Other notable changes include rear deck and roof spoilers, while the interior features red trim to match the exterior.

Brabus has its headquarters in Germany, but has USA headquarters in Irvine, California. They are the worldwide leader in high-end tuning and lifestyle for Mercedes-Benz, Maybach, and Smart automobiles. Brabus is present in more than 100 countries around the world. Brabus is all about high-performance par excellence and top-notch quality.

The 2014 Mercedes-Benz CLA-Class establishes a new segment for the German automaker and they expect to attract a new generation of performance enthusiasts with the car. Brabus takes the CLA45 AMG and cranks it up another notch. Want the fastest CLA-Class on the planet? Contact Brabus at 949-229-1770 or email [email protected]