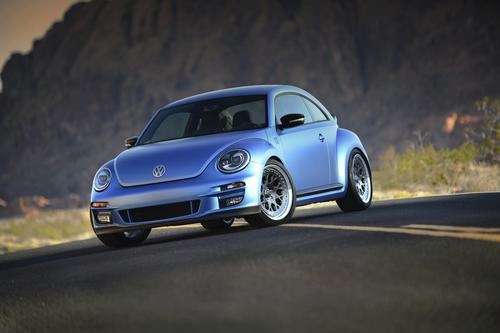 Volkswagen is celebrating 75 years of the Beetle by taking a 2013 Beetle Turbo and turning it into the ultra-high-performance VWvortex Super Beetle.
Advertisement

Volkswagen is celebrating 75 years of the Beetle in 2013 and the German automaker is starting the celebration early at the 2012 SEMA Show. The Beetle has always been the perfect platform for customization here in the U.S and a popular car for tuners for decades. To honor this rich history, Volkswagen has partnered with a number of suppliers and customizers to show what the Beetle is capable of in a highly customized form. VW has brought a fleet of highly tuned Beetle show cars to celebrate the three-quarter century mark.

The most customized Beetle of the show will be the VWvortex Super Beetle. How do you build the ultimate performance Beetle? The head of Product Planning at Volkswagen of America, Rainer Michael and the Chief Product and Marketing Officer Tim Mahoney met with the VWvortex team and asked them what they would do if they could build the ultimate Beetle. You do what any performance enthusiast would do. You take the stock 200 horsepower engine and put 500 horsepower into it. And with all that power, you take the all-wheel-drive system from the Golf R and transplant it into the Beetle to keep all four wheels firmly planted to the ground. And that’s just the beginning.

The VWvortex team took the challenge and working with performance specialist APR, started with a stock 2013 Beetle Turbo and began the transformation into the ultimate 500-horsepower all-wheel-drive high-performance show car. The Super Beetle will be a one-off show car and will not make it to production. The team started by giving the VWvortex Super Beetle an APR Stage IV GTX Turbocharger System to boost horsepower from 200 to more than 500. All the internals need to be upgraded to handle the extra boost, and that included a new high-flow cylinder head and intake manifold; high-strength coated pistons and wrist pins; high-strength connecting rods and bearings; an upgraded balancer shaft; and a balanced rotating assembly.

Externally the engine got an APR updated fuel system and added a high-performance intercooler system, as well as an ECU upgrade. To increase the flow of exhaust, an APR RSC Turboback Exhaust System was added and a DXD Racing Stage III clutch and Volkswagen Racing Short Shifter were added to transfer power to the new Golf R all-wheel-drive system.

A custom suspension built for speed

In addition to the VWvortex Super Beetle, the VW Beetle celebration continues at SEMA with four other highly-tuned Beetle models and a high-performance Golf R project car. The european car Magazine “Beach Battle-Cruiser” is designed to offer the ultimate “one-stop-shop for beachgoers,” the fun car provides everything needed for a perfect day at the beach.

The Galpin Auto Sports (GAS) “Chopped Top” Beetle has a custom chopped roof; lowered 5.5-inches at the A-pillar and 2.5-inches at the B-pillar for the ultimate raked look. The two FMS Automotive 1956 and 2012 Beetle models were built to show the history of the Volkswagen Beetle with both vehicles getting custom performance upgrades.

The Rotiform Beetle gets an air suspension system from Air Lift and the Rotiform team was able to “lay-frame” on this modern Beetle, similar to what tuners of the classic air-cooled models did decades before. The H&R Golf R gets a new suspension with lightweight aluminum front struts and rear dampers and a ride height that’s 1.3 and 1.6 inches lower in the front and rear.

The VWvortex Super Beetle and the other highly tuned Beetles can be seen at the H&R Springs booth from October 30 to November 2 at the 2012 SEMA Show in Las Vegas.

For more information on the build-up of the VWvortex Super Beetle visit http://superbeetle.vwvortex.com

Nicolas Zart wrote on October 30, 2012 - 2:36pm Permalink
I wonder about product dilution these days. I've always liked the original Beetle as much as the guy next door but felt it was a stretch when it came back later still called a Beetle but in a front wheel drive platform. Now a 500hp Beetle? Seems automakers are diluting their platforms by making those iconic cars do more than the market segment they once appealed to. I wonder what they want to achieve, short of the financial obvious by using cars that inspire generation in as many versions as possible. I guess I miss the days when a Beetle was a Beetle and not a suped up car that has more and more hints of a Porsche... but then again, I still drive a 1974 Alfa Romeo because I can recognize it in a parking lot :)
Fritzo wrote on October 31, 2012 - 9:10am Permalink
I agree--and a lot of iconic car makers are diluting themselves these days. The VW Beetle is supposed to be a very basic, inexpensive, and efficient form of transportation. It's supposed to be a $12000 car that has no frills, a cute design, and innovative functionality. Instead a basic Beetle runs nearly $20K, and it isn't the best choice for anything. It's not the best car for the money, it isn't inexpensive, it isn't particularly super-efficient, and the inside of the car is anything but basic. MINI and Porsche are doing the same thing. MINI keeps making its cars bigger and bigger (they're going to have to call themselves MAXI soon), and Porsche keeps expanding into family sedans, SUV's, and wagons instead of sports cars. When you start losing your focus, you start missing your goals, and this is very evident in VW.
Nicolas Zart wrote on October 31, 2012 - 12:54pm Permalink
I agree, I think the Mini has lost focus. The newer 4WD, four door would be better called a Maxi. It's big. Unfortunately, the Beetle is no longer a Beetle, or what made it so unique. I assume VW is counting on people not remembering what the Beetle stood for :) I think VW wants to make sure it doesn't lose it market share lead but we know how that ends up in the end with GM and Toyota's examples. I certainly don't represent the majority of car buyers, but I prefer smaller makers that pour their heart and souls into their unique cars.