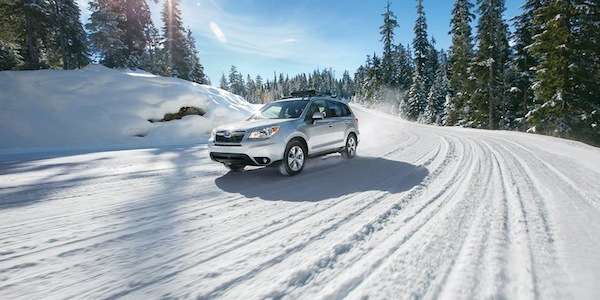 See what happens when Consumer Reports takes the 2015 Subaru Forester, Honda CR-V and Toyota RAV4 and tests them in the snow. Who wins this competition?
Advertisement

According to Consumer Reports (CR), not all small SUVs are created equal. Three of the most popular small SUVs in this segment were tested by Consumer Reports at their Connecticut auto-test center in snowy conditions. CR tested the 2015 Subaru Forester, Honda CR-V, and Toyota RAV4 for straight line acceleration, braking, hill climbing and cornering evaluations under similar conditions on their test track. Who wins this competition?

Consumer Reports found that not all all-wheel-drive systems are created equal and they think Subaru has the best one of the three small SUVs. CR’s judgments reflected their actual experience after weeks of driving in different snow conditions. They reported the 2015 Subaru Forester was the clear winner after their examination was complete. Check out the video from CR below and see what they found out.

Here’s what CR said about the Forester, “It started, stopped, and cornered the way people expect an AWD car to drive. We could feel the power being directed to all four wheels at different times to help stay on course. It felt well-balanced and allowed us to make mid-corner adjustments without losing traction. Stability control wasn’t overbearing but helped when needed.”

Consumer Reports thought the Honda CR-V felt like a front-drive car and had trouble steering through corners and inspired less confidence in the snow. Their testing determined the Toyota RAV4 AWD system often didn’t respond to steering, braking, and throttle inputs, plowing straight through curves.

Overall, all of CR’s driver assessments were the same. According to Consumer Reports, the 2015 Subaru Forester SUV clearly outperformed the CR-V and RAV4 at accelerating, hill climbing and cornering in the snow. CR said, “When it came to staying on course while rounding curves, we found pronounced differences among the vehicles, with the Subaru Forester the leader.”

To get more information on the Forester’s AWD system, click here.