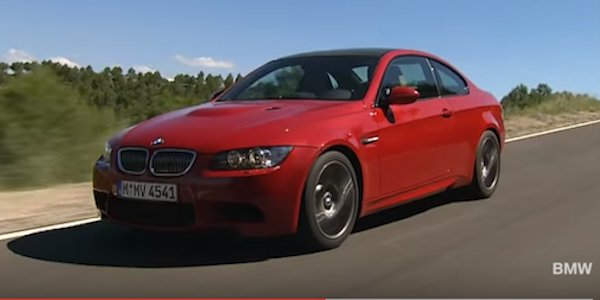 Video: 8 reasons why the E92 will forever be the classic BMW M3

The fourth generation BMW M3 E92 was the most powerful to date. Why will the E92 forever be the classic in the M3 family?
Advertisement

The fourth generation M3 E92 was a big step up from the previous generation E46 for four reasons. BMW made it lighter and faster for performance enthusiasts. BMW M GmbH cranked up the horsepower and made the new E92 lighter for improved performance. Why will the E92 go down in history as the model recognized as the definitive M3?

The other two reasons why the E92 was a big step up for the M3 were the addition of two more cylinders. It came with eight-cylinders for the first time and it cranked out 420 horsepower. The new fourth generation M3 (2007-2013 ) was available as a coupe, sedan or convertible model. BMW M engineers made three improvements to the new E92 that made it the fastest and lightest M3 to date. It was the V8 powerplant in the new M3 E92 that will set this generation M3 apart forever because it’s not coming back.

Three weight-saving changes made to E92

The E92 came with new lightweight construction that included a lighter weight-saving front bumper, lighter exhaust system and a carbon fiber roof that was introduced on the E46 CSL Edition. BMW engineers gained valuable experience and brought the carbon fiber roof into full production in the E92. All these changes were designed to save weight and translated to faster sprint times. All these technologies are seen today on the new-generation M3/M4.

Here’s where the E92 will be set apart forever from every other M3 in past and future models. BMW M added two more cylinders going from the 3.2-liter naturally aspirated inline six-cylinder engine producing 338hp, to the first-ever V8 offered in the M3. The 4.0-liter V8 pumped out 420 horsepower dramatically increasing power and performance. BMW couldn’t crank up the hp in the previous generation’s inline six, so BMW stuffed the V8 under the M3 E92’s hood. It was an instant hit with performance enthusiasts.

Another new technology on the M3 E92 was the high rpm optimized double clutch automatic transmission. They had to design a new gearbox to withstand the higher 8400 rpm revs of the new 4.0- liter V8. To go along with the new V8-powered E92, BMW M in 2009, developed the M3 TTS Limited Edition racing version with only 135 examples being produced worldwide. BMW put in an even bigger 4.4-liter V8 that cranked out 450hp. The track M model would sprint from 0-62 mph in 4.4 seconds. BMW M then developed an even more exclusive M3 CRT for the sedan variant and produced only 67 units globally.

BMW M went back to the 3.0-liter inline six for the new-generation models and found a way to get even more hp with TwinPower Turbo technology. The M3/M4’s 3.0-liter delivers 11 hp and 110 lb. ft of torque more than the naturally aspirated 4.0-liter V8 direct-injection powerplant from the E92. This is what will set the E92 apart from all other M3’s and made it special for performance enthusiasts around the globe. The BMW M3 E92 will forever be remembered as the classic M3 because it’s the only V8-powered version and it’s not coming back.

Check out BMW’s E92 film. Everything about the fourth generation BMW M3 video.

Todd Fry wrote on January 8, 2016 - 8:45pm Permalink
Not sure where you are getting your information, but the E92 was about 300 pounds heavier than the E46 M3. Moreover, no BMW aficionado would consider the E92 the "classic" M3, primarily because of its V-8; BMW's classic engine has always been the inline 6.
eric wrote on August 22, 2016 - 11:47pm Permalink
well, the most sought after M model right now is the e30, which has a straight-4 and not an inline 6.
Ivan Bauret wrote on October 27, 2017 - 11:20pm Permalink
Funny, This is to me the LEAST DESIRABLE M3 ever!!! Too big, too disconnected driving impression, feels like a Nissan GTR on the track, stepin it and sit back and let the car drive for you. BMW has lost it's M purpose with that generation and they are now trying to correct it.
Ivan Bauret wrote on October 27, 2017 - 11:22pm Permalink
No, the most sought after M3 is now the e46. E 30 are beautiful pieces but waaaaaaaay over priced and not that fast e36 are nice mechanically but were behind the e46 dynamically. The e46 combined a great chassis with the best engine and beautiful looks before you know who started disfiguring all BMW models..